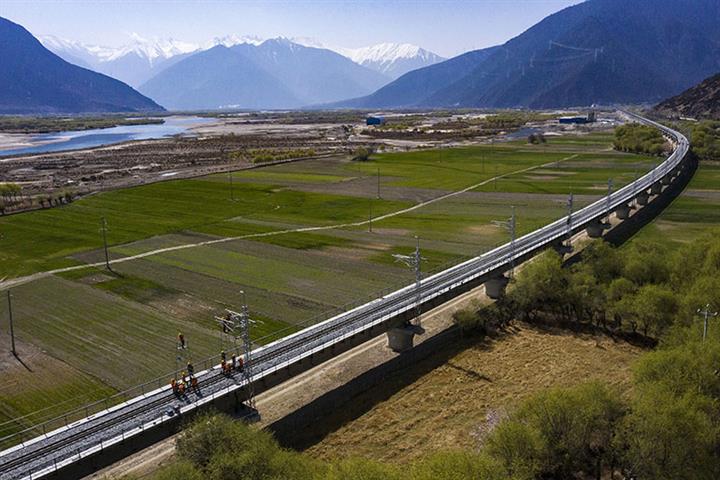 (Yicai Global) June 11 -- China will finish building a route between Lhasa and Nyingchi, two cities in the mountainous Tibet Autonomous Region, this month after more than six years of construction.

The 435-kilometer route will be opened before July 1, China State Railway Group said on its website yesterday. The journey from the region's capital to the city close to the border with India, also known as Linzhi, will take three hours.

The line will eventually be connected to the Sichuan-Tibet railway so passengers should find it easier to travel to Chengdu in southwestern China. But that might take some time. A section that links Nyingchi with Sichuan province's Ya'an was started last November and should take 10 years to build.

The state-owned company announced some technical upgrades. The number of Fuxing series of high-speed electric multiple-unit trains, which can go as fast as 350 km per hour, will be increased.

By June 25, the Beijing–Shanghai high-speed railway will have 66 such trains instead of the earlier 36. A route between southwestern China's Nanning and southern Guangzhou should double the number of Fuxing EMU trains to 16.

The Beijing–Harbin high-speed railway will have 112 bullet trains instead of the earlier 60. For the first time, eastern China's Suzhou North railway station, Wuxi, and Lianyungang will start operating high-speed trains to Beijing.