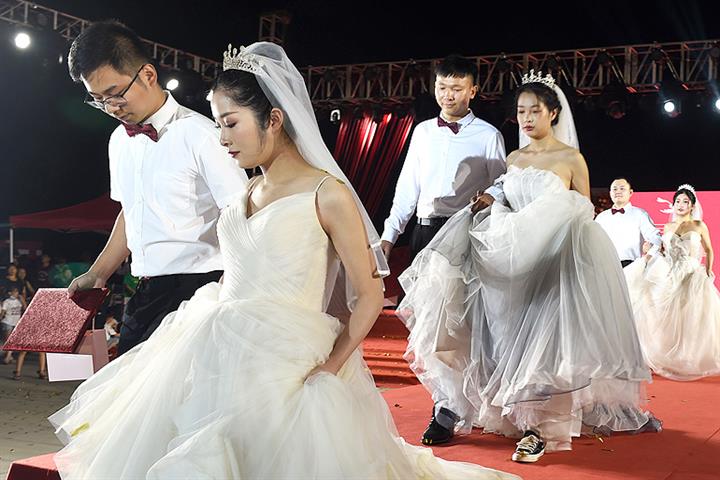 (Yicai Global) Feb. 19 -- There were almost a third less couples who got married for the first time in China in 2019 than in 2013 as exorbitant property prices, a decline in the number of eligible singletons and more choices cause young people to put off tying the knot.

There were 9.27 million weddings in 2019, a fall of 31.2 percent from six years prior, according to official data.

This can be partially attributed to the country’s dwindling birth rate. Some 23 million people were born each year between 1986 and 1990, but this had dropped to below 20 million by 1998. This means that the number of marriages is likely to continue to fall to under nine million or even eight million a year, experts said.

People are also choosing to get married later, or not at all, Hu Gang, professor at Guangzhou's Jinan University, told Yicai Global. Many opt to pursue higher education or to put their career first. Those who live in big cities have more options, he added.

Out of the 30 students in 30-year-old Li’s undergraduate class, two-thirds are still unmarried, she said. And three out of four of the graduates in her dormitory are not yet wed.

Sky-high housing prices in a culture which puts great emphasis on a young man owning his own home before getting married, is also causing people to delay marriage.

“The main reason I am still single is that property prices are high and the pressure to buy a house is too much,” said 32-year-old Xu. He works for a small information technology company in Hangzhou, eastern Zhejiang province and expects to work for another year or two before he can buy a property and settle down.

One-fifth of households in eight Chinese provinces are single person households, according to the National Bureau of Statistics. Guangdong, the province with the largest economy, has the most people who live alone at 29.34 percent. Shanghai and Zhejiang province ranked second and third with more than 25 percent. Beijing came fourth with 22.26 percent.

Divorces, meanwhile, are also on the rise. There were 4.7 million divorces in 2019, a 74 percent jump in 10 years, according to the Ministry of Civil Affairs. While some of the divorces are ‘fake’ ones, when couples split to avoid house purchase restrictions or debts, many are due to social and ideological changes. Today’s youth have more choices and can put more emphasis on the quality of their relationships and the harmony of their marital life.