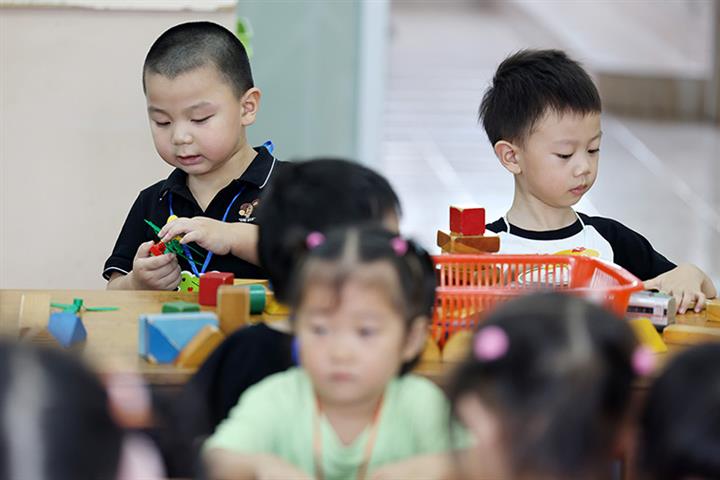 (Yicai Global) March 22 -- A sound childcare system that supports working parents and helps to reduce their economic burden would be a major factor in boosting the country’s population growth, now on the cusp of decline, experts said at a high-level business forum held over the weekend.

The main factors discouraging couples from having children are down to high housing, medical and education costs and their access to good education, Wang Jiexiu, director of the policy research center of the Ministry of Civil Affairs, said at the China Development Forum. An improved social security system with good child benefits could bolster the fertility rate.

As the Chinese economy becomes more highly developed, people are spending longer in education, delaying getting married and having children later, all of which also affects the number of kids being born, he added.

Last year there were an average of 1.49 births per woman, below the global warning line of 1.5, according to the National Bureau of Statistics. The birth rate has slumped for the past five years and in 2020 there were 10 million registered newborns.

China should learn from the experience of other countries and offer economic subsidies, increase the supply of daycare services, reduce personal income taxes, protect women’s rights in employment and safeguard the interests of illegitimate children, said Ren Zeping, chief economist at Soochow Securities.

The current sub-replacement fertility, which refers to the next generation being less in number than the current one, calls for increased spending on education, healthcare and social security to reduce the burden of raising children, Ren added.

Japan, the first nation in the world to start battling both an alarming drop in the birth rate and a rapidly aging population, has brought in a raft of measures since the 2000s to help parents achieve a better work and family life balance, said Tsukasa Sasai, senior researcher at the National Institute of Population and Social Security Research.