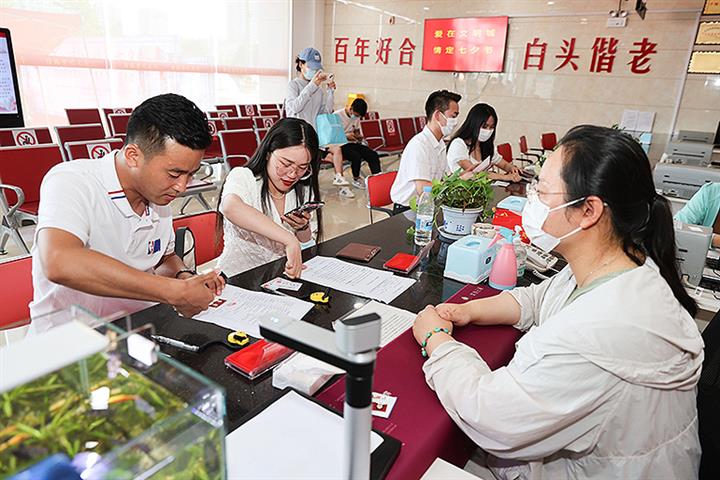 (Yicai Global) Aug. 31 -- Fewer people got married in China last year than in the past 36 years as people are pursuing increasingly urban lifestyles.

The number of new marriages dropped by 6 percent to 7.6 million in 2021 from a year earlier, the lowest since 1986, according to the latest data released by the Ministry of Civil Affairs. The figure fell below eight million for the first time since 2003.

China's marriage rate, which measures the number of new marriages per 1,000 residents per year, was 0.54 percent, down by 0.04 percentage point from 2020.

The data point to changes in lifestyle. Many young people moved to big cities and faced great pressures involving housing, transportation, and consumption, and this has an impact on love and marriage, said Dong Yuzheng, a director of the Guangdong Academy of Population Development. Still, some of the reasons are internal. Young people are reforming their opinions and attitudes about marriage, Dong added.

However, people are not divorcing as often anymore after the country started a new policy that promotes spouses to think twice about going separate ways. China registered 2.8 million divorces last year, down by almost 35 percent from 2020. The nation implemented a "cooling-off period" on Jan. 1, 2021, to allow potential divorcees to regret within 30 days and stay married.