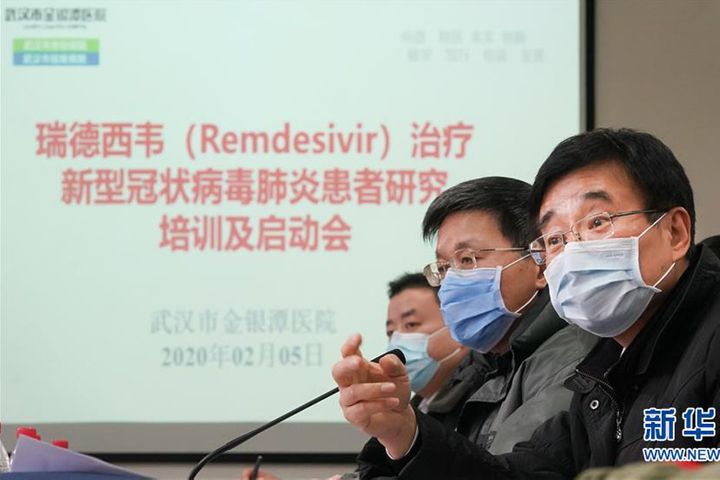 (Yicai Global) Feb. 6 -- Jinyintan Hospital in Wuhan, the epicenter of the global novel coronavirus outbreak, has begun double-blind clinical trials of a drug targeting the disease.

The trial, including 453 severely ill patients and 308 who are moderately sick, began yesterday. It involves Remdesivir, a treatment produced by California-based antiviral specialist Gilead, which is providing the drugs for free and offering support for the study. The firm has been active in China since 2007 and has eight approved drugs in the country targeting hepatitis B and C, human immunodeficiency virus and acquired immune deficiency syndrome.

Prof. Cao Bin of the Beijing China-Japan Friendship Hospital, who is leading the trials, explained that the study is a strict randomized double-blind trial so neither the patient nor the doctor knows whether the test drug or placebo is being taken.

China's National Medical Products Administration green-lit the trials earlier this week and  a customs clearance form seen by Yicai Global shows that 2,843 boxes of the drug, worth USD56,405, arrived in Beijing on Feb. 4.

Remdesivir was originally intended for the Ebola virus but has not yet received commercial approval in any country. It has been administered as a compassionate use treatment for the novel coronavirus in the United States and seemingly helped clear the symptoms.

"So far there is only one case of its use being effective abroad and that patient was also given other drugs," a staffer at a pharmaceutical contract researcher told Yicai Global. "We cannot rule out the possibility of recovery from autoimmunity."