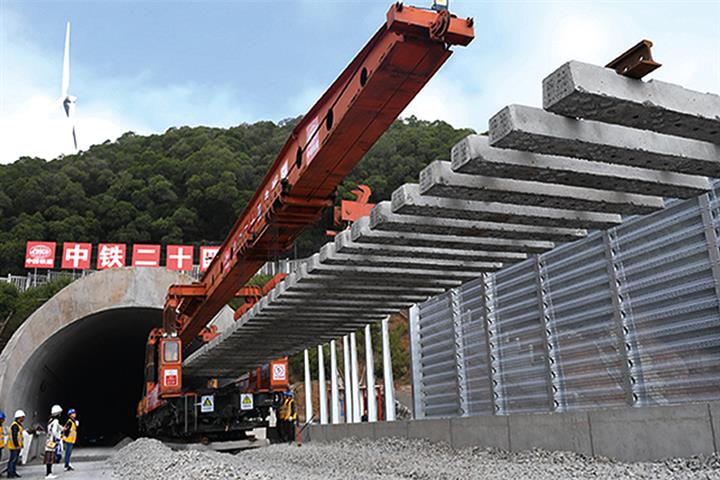 (Yicai Global) Sept. 20 -- To give full play to the role of infrastructure investment in driving economic growth, China recently accelerated the pace of approvals for major rail projects, with the fourth quarter expected to usher in a new wave of construction.

Dozens of projects, including the Ankang-Chongqing section of the Chungqing-Xi'an High-Speed Railway linking the two major cities in western China, will get underway between next month and December. That project secured the Ministry of Ecology and Environment’s go-ahead on Sept. 8.

At an internal meeting of China State Railway Group on Sept. 5 the country’s largest rail operator said it will speed up projects under construction and push forward with feasibility studies for new ones as soon as possible, according to the firm’s website.

Building work on the North Yangtze High-Speed Railway that links Shanghai with neighboring Jiangsu and Anhui provinces and the Chengdu-Dazhou-Wanzhou High-Speed Railway connecting southwestern Sichuan province with Chongqing is also set to begin in October.

In the two years after the pandemic started, fixed-asset investment in China’s railroads fell. The country invested CNY748.9 billion (USD107 billion) in rail projects last year, down 4.2 percent from 2020 to an eight-year low, according to figures from the National Railway Administration. Between this January and last month, spending fell 4.4 percent to CNY402.8 billion from a year ago.

China has taken steps since the start of the year to boost investment and steady the economy. In a policy document released by the cabinet at the end of May, it said it would speed up the promotion of investment in transport infrastructure and support China Railway to issue CNY300 billion (USD42.8 billion) of construction bonds.