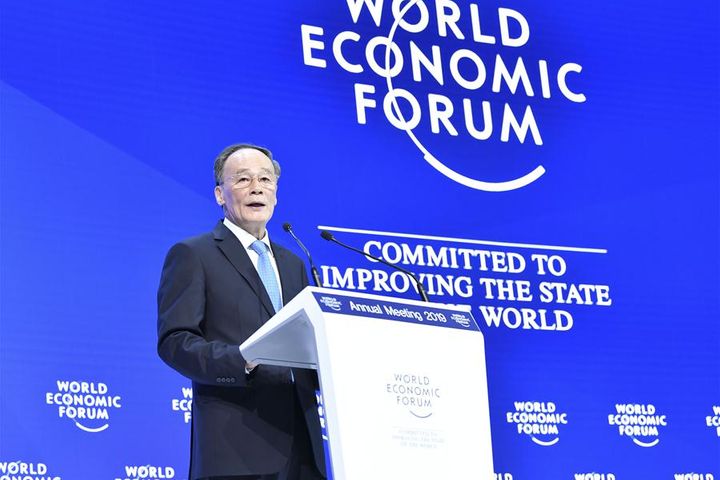 China implemented reforms of mechanisms related to foreign exchange rates in August 2015 and caused tremors in the emerging market. Various sectors began to pay utmost attention to the spillover effect of the Chinese economy. It still faces the possibility of a downturn with existing external uncertainties this year. The focus of the WEF in Davos again returns to how the Chinese economic situation will influence the entire world.

"I recall that I once attended a discussion, saying that if China can maintain an annual growth of 4.5 percent in its economy in 2016, we can achieve our target of fully realizing a moderately well-off society and quadrupling gross domestic product, first proposed by Deng Xiaoping," Wang said. "Now the growth rate is 6.6 percent, I believe it is not a low speed."

"Although the speed is important, the quality, structure and efficiency of growth are more essential," Wang added.

"Generally, although all kinds of risks, challenges and difficulties exist, completing the task of fully realizing a moderately well-off society by 2020 will not be a problem," he said. "We will not fail in achieving it but surpass this anticipated goal and this is already an undeniable fact. No matter what happens this year, which is full of uncertainty, China's sustainable development can be determined within a high level of probability."

Globalization is a historical trend and imbalances are inevitable in its process, Wang claimed when talking about the tide of anti-globalization and populism emerging in various parts of the world, adding "the balance is relative but the imbalance is absolute from a philosophical perspective."

It is reasonable that the imbalance has appeared, he said. "The key to solving the fundamental problem is to adopt different policy measures through efforts from governments in various countries to eliminate imbalances and achieve fairness and efficiency," he added.

"I believe globalization can be further guaranteed if the above goal is reached," Wang concluded.

Before the opening of this year's WEF in Davos, the International Monetary Fund whittled down its forecasts for global economic growth this and next year by 0.2 percentage point and 0.1 percentage point, respectively, to 3.5 and 3.6 percent, and said the risks of a downturn continue to grow. "Do you think China is fully prepared?" Schwab asked Wang.

"We cannot avoid it, whether it is a blessing or a curse, what if a crisis really happens?" Wang responded. "In addition, is this current cycle [of economic growth] about to end? I believe various people will hold different opinions."

"For instance, some also believe that the Chinese economy's growth has come to an end," he said. "For China, however, we are still sustainable in growth rather than having already reached the end. So various people will hold different opinions about the same issue."

"China is fulfilling its own duties and focusing on its growth," he added. "Due to the Chinese economy being interconnected with and supplementary to the world's overall situation, China's development itself is a contributor to the whole world and the entire human race."

"I think the entry of emerging market economies into the process of globalization helped the world out of the Wall Street financial crisis in a very short time," Wang said when asked about why the 2008 crisis ended so soon.

There are also others that view the crisis as starting in the US, but why would China take more measures than the US? "The attitude of the Chinese government and measures it adopted after 2008 reflected that China is a responsible country," he responded. "The policy measures we adopted at that time helped the world to quickly overcome the financial crisis, and this is exactly the contributions made in emerging market economies. I am generally optimistic about the economic outlook," he explained.

Wang disagreed that another global economic crisis could definitely occur in the future. "If another crisis does occur in this world full of uncertainty, I believe it will ultimately test the wisdom and diligence of the entire human race, just like getting a cold or a fever," he said. "Considering it from the perspectives of history, philosophy and culture, the human race will not be beaten by a crisis and catching a fever is exactly the right way to test the immune system."

Wang frankly indicated that he is an optimist regarding the Chinese economy.

Mutually Beneficial Cooperation Between China and US

When asked about prospects for China-US relations, Wang gave a concise and clear answer that "the Chinese and US economies cannot be separated from each other, the two must cooperate to achieve mutual benefits instead of fighting, this is a basic judgment."

President Trump is not participating in the WEF because of a budget stalemate, he then cancelled the entire US delegation's trip to Davos, which was originally to be led by Treasury Secretary Steven Mnuchin and Secretary of State Mike Pompeo.

The US entered the 33rd day of a government shutdown yesterday, the longest of its kind on record.

Rules Must Keep Pace With Industry 4.0

The theme of this year's WEF is Globalization 4.0: Shaping a Global Architecture in the Age of the Fourth Industrial Revolution. It is undeniable that the fourth industrial revolution is also challenging some existing standards.

Fundamental changes occurring under Industry 4.0 are scientific discoveries and technological innovations, Wang noted, adding problems arising in development can only be solved by development itself, of which the driving forces are science and technology. "New technologies and innovations will renew development, bringing happiness and hope to all mankind, which will also inevitably challenge some rules and standards."

Various sectors should start from reality and continuously implement timely adjustments and reforms, he emphasized regarding standards, adding that rules should be made in line with developments.