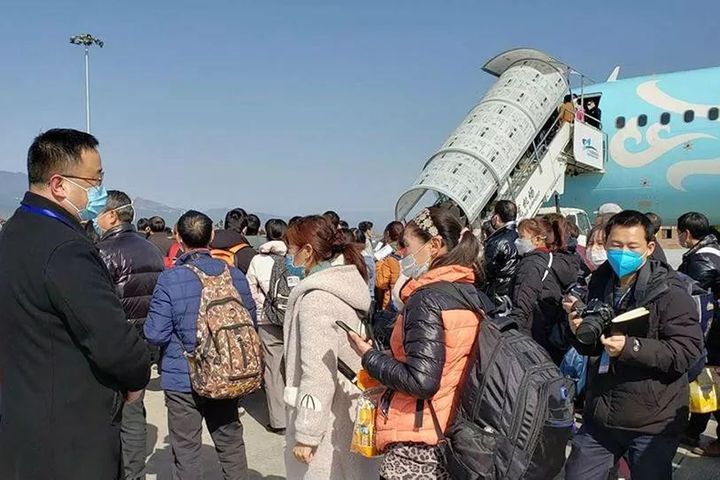 (Yicai Global) Feb. 19 -- Chinese airlines which have been virtually grounded as the Covid-19 epidemic has slowed passenger flows to a trickle have leapt with understandable alacrity to meet the demand for charter flights to bring migrant workers back to their posts who the pestilence has stranded in their hometowns.

Spring Airlines' direct non-stop flight from Kunming in Southwest China to Shanghai yesterday was the first flight to carry such staffers back, this time to factories in Huzhou in the eastern economic powerhouse province of Zhejiang. The city government is picking up the tab for the airlift. All passenger health data was checked locally before departure. After alighting in Shanghai, these workers took seven buses to nearby Huzhou, a lakeside city famous for its towering doughnut-shaped Sheraton Huzhou Hot Spring Resort, 136 kilometers to the west of the eastern megacity, and are back on the job today.

China Eastern Airlines, China Southern Airlines and Juneyao Airlines, among others, also announced charter flights yesterday. Some of these are being fully underwritten by local governments, while the companies they directly benefit are also chipping in on others.

"Resumption of work and production and epidemic prevention and control have become the most urgent needs of governments and companies. Fast speeds and good air circulation in the cabin have made flights the transport means of choice to whisk employees back. As airlines face many cancelled flights, as long as there is business, the price is negotiable, so [the idea of using] charter flights to return workers emerged," said Lin Zhijie, a civil aviation sector analyst.

As district governments incline more to support their local airlines, those registered in their jurisdictions or in neighboring areas have become their first choices, Lin added.