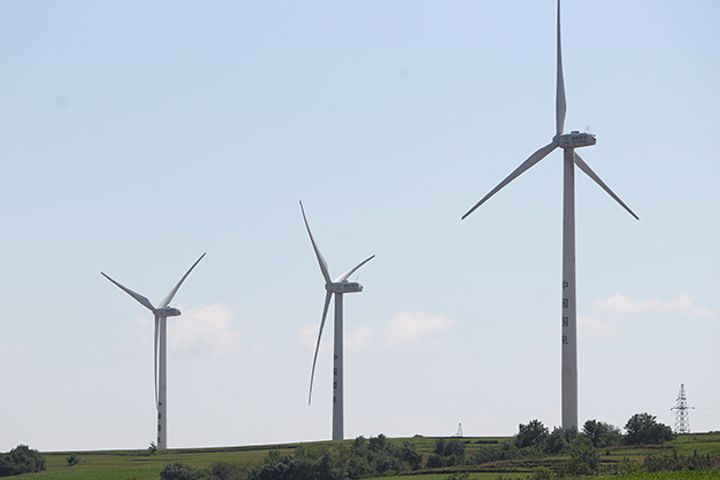 (Yicai Global) Nov. 5 -- Reduced subsidies to China's wind power sector have continued to divert the cost control pressure of wind farm construction to upstream wind turbines and component makers in a clear differentiation of their performance from that of downstream players, notwithstanding the sector's overall recovery. Many are switching to operation and maintenance to cope with the shifting terrain.

Net profits of the top six companies made up over 90 percent of that of the 15,   with their main businesses being development, construction and management of downstream wind farms, per the reports.

Most upstream machine makers face fierce competition, raw material price rises, and squeezed product margins. The performance of seven companies out of the 15 declined in the first three quarters on the same period last year, among which the net loss of Dalian Heavy Industry was USD150 million (USD22 million).

The fundamentals of the wind power sector are continuing to improve, with generation up 12.7 to 24.3 percent in the first nine months, and the wind turbine suspension problem partly solved, according to a research report by CMB International, a wholly-owned unit of Shenzhen-headquartered China Merchants Bank.

Wind turbine suspension is occurring at the initial stage of wind farm operation, when blades in some wind farms stop turning because of insufficient capacity of the local power grid, mismatched wind farm construction periods and unstable wind power, wasting much in the way of wind resources.

The wind power sector's development is also reflected in the performance of its listed companies. The net profit attributable to shareholders of Beijing-based Longyuan Power, China's largest wind power producer, reached CNY4 billion in the first three quarters, a rise of over 40 percent on the same period last year. Its wind power revenue was CNY13.4 billion, making up 70 percent of its total.

The company's wind turbine suspension significantly eased from January to September, raising its wind power utilization by 14.2 percent on the same period last year to 1,637 hours, higher than the national average for the same period, while its suspension rate dropped to 6.3 percent from 11.7 percent.

The average wind speed increase of Beijing-headquartered CECEP Wind-power's wind farms and improvement of wind turbine suspension compared with the same period of last year have together upped its electricity sales and revenue, its third- quarter report shows.

With the decline of wind power machine bidding prices since last year, the gross profit rate of wind turbine producers is being squeezed although the overall performance of the sector has improved.

Thinner upstream profit margins are causing many wind turbine manufacturers to begin to turn their sights on the post-operation and maintenance market.

Beijing-headquartered Sinovel Wind Group, once the domestic wind power industry leader, is hitching its hopes to ridding itself of trouble in its wholly-owned operation and maintenance subsidiary Ruiyuan Wind Power Technology.

Sinovel is not the only another major wind turbine maker to appreciate the huge potential of the post operation and maintenance market, however, as Beijing-based Goldwind has also become involved in investment and development and construction and operation of wind farms through its unit Beijing Tianrun New Energy Investment.

Falling gross profit rate from declining wind turbine prices realigned Goldwind toward operating and maintenance as its main growth point in the third quarter since these sustained relatively high growth.