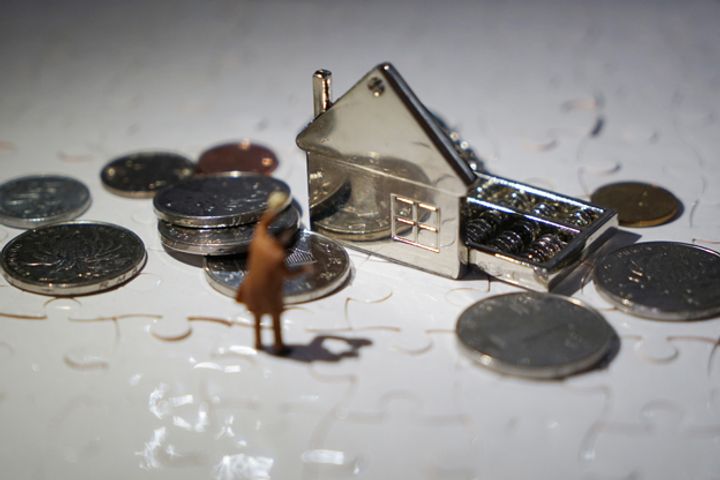 (Yicai Global) Feb. 5 -- This winter has been particularly cold for mortgage borrowers and real estate developers throughout China, as banks in some cities marked up housing loan interest rates and squeezed financing provided to property developers. Chinese banks have also continuously ramped up credit support for rental property projects.

Banks in Beijing and Shanghai have previously increased housing loan interest rates six times, mortgage rates in those cities had remained higher than those in Guangzhou up until the recent rate hike in the southern economic powerhouse.

With most banks in Beijing, the mortgage rate is floated up by 10 percent for first-time homebuyers and by 20 percent for second-time buyers, a local real estate agent told Yicai Global.

A Credit Crunch for Property Developers

Real estate companies have found it increasingly difficult to apply for funding from banks ever since the turn of the year, our reporter learned.

"This is a normal business decision that we made based on the bank's loan structure. It's a temporary measure and doesn't affect any other operations," a source at the bank told Yicai Global, confirming the news.

Another joint-stock bank based in Beijing also brought a halt to processing new property development loan applications as early as last year, an informed source said.

A local branch of one of the four state-owned banks in a third-tier city still has unused credit available for developers, but the total line of credit has been substantially reduced, with the interest rate fixed at 15 percent, a source from the bank said.

Our reporter interviewed a source at the local branch of a state-run bank in Xiangyang, a third-tier city in Hubei. The bank has tightened its grip on financing for developers, and interest rates have risen to over 10 percent. Many local property companies have secured funding via off-balance-sheet transactions or other alternative financing channels because few of them can get bank loans.

Banks Are Diverting Funds Toward the Rental Property Market

Despite the general credit crunch for developers and rising mortgage interest rates, the four state-owned banks have rolled out loan products targeted at rental property businesses and increased lending for them.

Our reporter found that CCB, ICBC, BOC and the Bank of Communications had signed strategic partnership agreements for rental housing business development with 30 provincial and municipal governments, pledging to offer more than CNY1 trillion in lending to related businesses.

The major banks have shifted their focus of operations away from mortgages to rental properties, in line with recent changes in national policies and market regulations.

The shift in the banks' attitude is also reflected in their pricing schemes. For example, CCB's Shenzhen branch introduced the first rental housing loan product in the country on Jan. 3, with the benchmark lending rate applied. The one-year loan interest rate is set at 4.35 percent, which is 1.04 percentage point lower than the mortgage rate (5.39 percent) for first-time homebuyers.

BOC unveiled its first rental property loan product in Xiamen, a second-tier city in south China's Fujian province, in November, and borrowers only need to pay the benchmark lending rate, a preferential interest rate previously offered only for first-time homebuyers.

ABC's Beijing branch closed a deal with the Beijing Public Housing Center and five developers on Jan. 18. The bank will lend CNY200 billion to the companies to finance rental housing developments on collectively-owned land in the city.

"National regulators have tightened controls on real estate development lending, but the policy for rental housing loans has remained relatively accommodative," said Zeng Gang, deputy head of the National Institution for Finance & Development. This will facilitate market restructuring and the introduction of a long-term market regulation mechanism characterized by the parallel development of the real estate and rental housing sectors, He added.