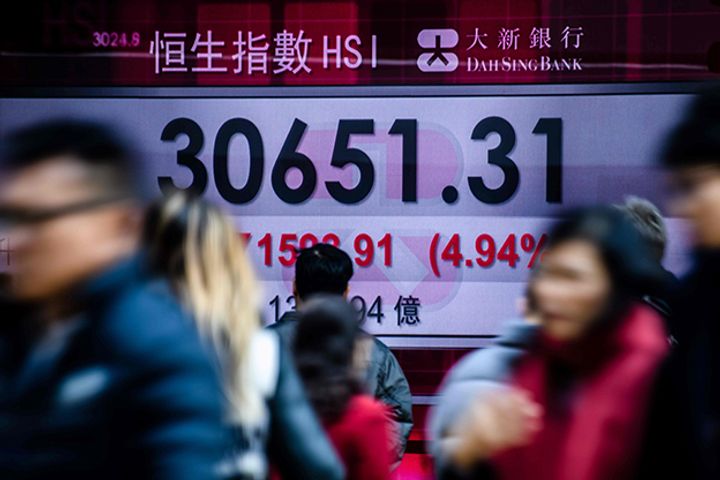 (Yicai Global) Feb. 7 -- As Hong Kong's equity market slumped yesterday in the aftermath of plunging U.S. stocks, Chinese mainland investors sought out bargains via the stock connect programs linking the region's bourse with those in Shenzhen and Shanghai, with HSBC Holdings Plc a top pick as a hedge against volatility.

Hong Kong's stock slide was so serious yesterday that Carrie Lam, the special administrative region's chief executive, issued a public statement warning investors about the risks. The city's equity swoon is mainly the result of an excessive rally last month, and price corrections will continue for the rest of this month, according to the consensus opinion of market insiders.

Some financial stocks ranked among the 10 most active on the Hong Kong Stock Exchange yesterday. Industrial and Commercial Bank of China Ltd. [HKG:1398], China Construction Bank Corp. [HKG:0939], Bank of China Ltd. [HKG:3988] and Ping An Insurance Group Co. [HKG:2318] had net capital inflows worth some HKD571 million, HKD324 million, HKD596 million and HKD558 million, respectively. All moved higher on Feb. 5, while their prices have remained stable amid the general slump.

Investment from the Chinese mainland is not a panacea for Hong Kong's woes, and the inflow of funds is no guarantee that Hong Kong will not slide further. The market is affected by a combination of factors, and mainland investors are just one of them. That said, Dickie Wong, managing director at the research department of Kongston Financial Group, points out that over the longer term mainland investors' support will benefit the market significantly.