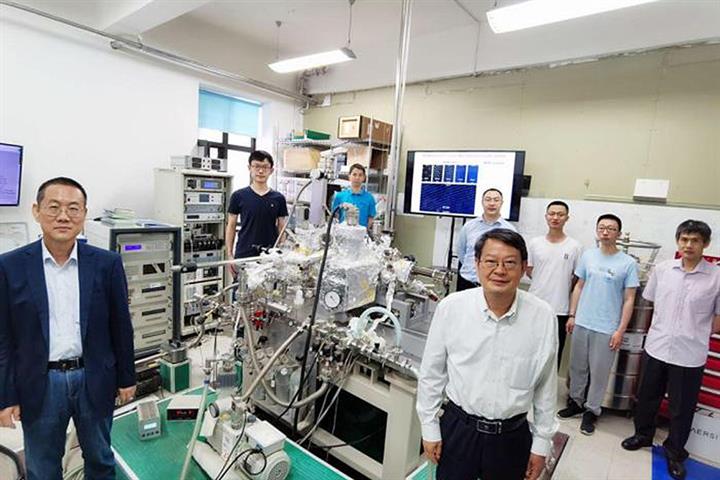 (Yicai Global) June 9 -- Chinese scientists have produced an extraordinary microscopic structure in a next-generation superconductor that may boost the performance of quantum computers in the future.

The study published in the journal Nature on Wednesday described an ordered and tunable lattice of Majorana zero modes (MZMs).

The MZMs, quasi-particles each of which is an antiparticle of itself, can be used for building blocks in constructing qubits, a quantum analog of classical bits in the quantum computer.

Unlike the classical ones comprising only the values of zero and one, the qubits are set in a coherent, simultaneous combination of both states, owing to a strange phenomenon in the quantum world called superposition. They allow computing to function faster than a classical one on an exponential scale.

However, quantum computers have to cope with how to produce high-quality qubits since their quantum states tend to rapidly collapse into classical ones due to environmental disturbance, thus substantially shortening the quantum computer's working time and resulting in miscalculations.

Some scientists have found that the MZM can potentially withstand the collapse process called "de-coherence," by weaving the qubits into its vortex structure.

In 2018, the researchers led by Gao Hongjun from the Institute of Physics under the Chinese Academy of Sciences have detected, via tunneling microscopy, the MZMs in iron-based superconducting alloy, one of the next-generation high-temperature superconductors.

In the new study, Gao's team reported the formation of a large, highly-ordered and tunable MZM lattice in the iron-based alloy comprising lithium, iron and arsenic.

They found in the structure "topological vortices" and more than 90 percent of the vortices possess the characteristics of isolated MZMs at the vortex center, forming an ordered MZM lattice with the density and the geometry tunable by an external magnetic field, according to the study.

The findings show promise in building an MZM-based platform for future quantum computation, the researchers said.