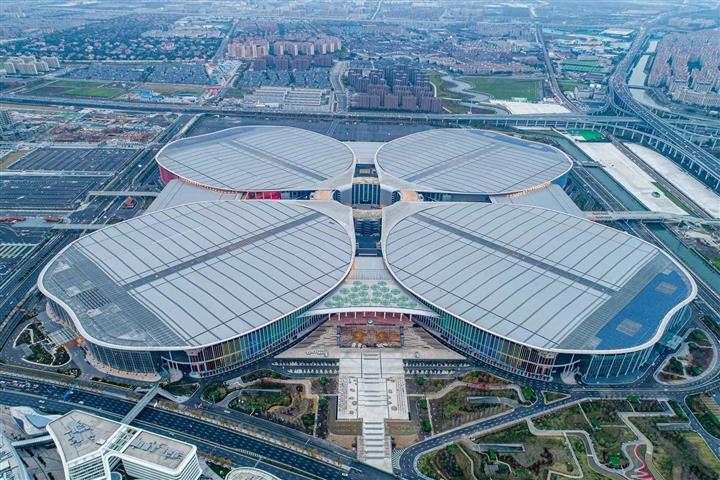 (Yicai Global) Sept. 15 -- The first batch of overseas exhibits at the fifth China International Import Expo are already on their way from South Africa as the 50-day countdown to the world’s largest import expo starts. Many old friends and newcomers are expected to take part in the event this year in Shanghai, which is well known for its fruitful spillover effects.

The South African exhibits are expected to arrive at the Port of Shanghai in early October after a sea voyage lasting 21 days, state broadcaster China Central Television reported. They will be the first foreign exhibits to arrive at this year’s CIIE.

The CIIE is a big draw for overseas firms and has a return rate of almost 90 percent. Their products are displayed across six sections, namely food and agricultural products, automobiles, smart industry and information technology, consumer goods, medical equipment and healthcare products as well as trade in services.

This year, there will also be a number of first-time participants such as Anglo-Australian minerals and mining corporation Rio Tinto, Australian miner BHP Group, German industrial engineering firm ThyssenKrupp and US drugmaker Gilead Sciences.

Danish pump manufacturer Grundfos, which is taking part in the CIIE for the fifth straight year, will present its latest product in the low-carbon energy and environmental technology subsection of the Intelligent Industry and Information Technology exhibition area.

"We have been planning the global debut of our new product at the CIIE all year," said John Markmann, chief executive of Grundfos’ China business. China is one of Grundfos’ most significant markets in the world. Last December, one month after the fourth CIIE, the Bjerringbro-based firm said it will invest USD100 million to build a new plant in Changshu, eastern Jiangsu province.

Accenture will release its 2022 China Digital Transformation Index at the fifth CIIE. The Irish-American professional services company has been tracking the digitization of Chinese firms for five years running now.

The Dublin-based company will showcase how to utilize metaverse-related technologies to help people with mental disabilities find jobs. It will also release two key research reports on artificial intelligence and sustainability. Accenture plans to ink crucial contracts with Chinese companies at the expo.

German glass maker Schott will unveil its ultra-thin flexible glass at the CIIE, the thinnest of which is just 16 micrometers wide, equal to two red blood cells.

China has become the largest consumer market for Schott and the Mainz-based company has been deeply involved in the ultra-thin glass industrial chain due to CIIE’s spillover effect, said Albert Chen, managing director of Schott China. This year has also marked the explosive growth of folding handsets, he added.