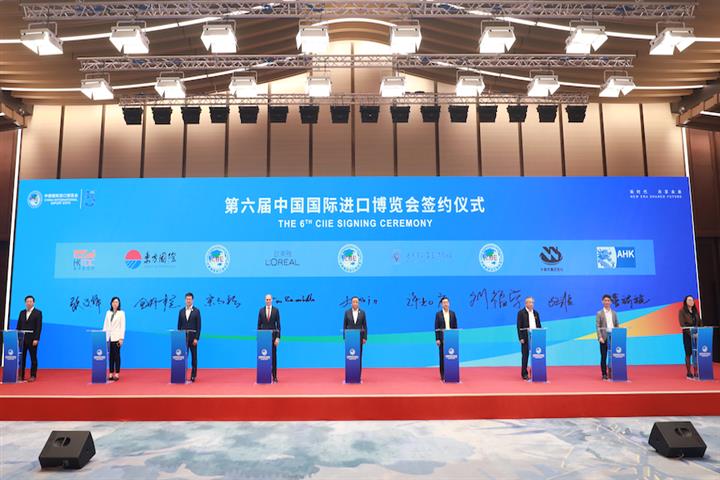 (Yicai Global) Sept. 16 -- The 50-day countdown to the fifth China International Import Expo and the signing event for the sixth edition of the expo were held in Shanghai today, with 40 Chinese and foreign enterprises signing up in advance to participate in next year’s CIIE.

The exhibition recruitment for the fifth CIIE has been completed, and the expo is now being actively promoted, said Liu Fuxue, deputy director-general of the CIIE Bureau.

Speaking on the occasion, Pietro Brambilla, chief financial officer of L’Oréal China, pointed out that over the past five years, the CIIE has witnessed a variety of exhibits turning into commodities, and more and more exhibitors becoming investors, or even partners.

The expo’s hot exhibits cover emerging sectors such as artificial intelligence and low carbon, he said.

The exhibition area of Carl Zeiss Vision China will reach 800 sqm this year, according to managing director Wilson Peng.

The German optoelectronic device maker has invested nearly CNY2 billion (USD285 million) in the Yangtze River Delta region and the Guangdong-Hong Kong-Macao Greater Bay Area through the CIIE in the past three years, he added.

Panasonic will continue to showcase products at a 1,000-sqm booth in the consumer goods exhibition area of the fifth CIIE this year, said Zhao Bingdi, president of Panasonic China.

The Japanese company has always believed in the future of the Chinese market, with more than 10 new or expansion projects and increasing investment in China, he observed.

The fifth CIIE, to be held from Nov. 5 to 10, will introduce a carbon inclusive mechanism and issue a zero-carbon CIIE proposal to actively advocate a low-carbon lifestyle in society, said Fang Hui, general manager of the operation center of the National Exhibition and Convention Center Shanghai, the event’s host.