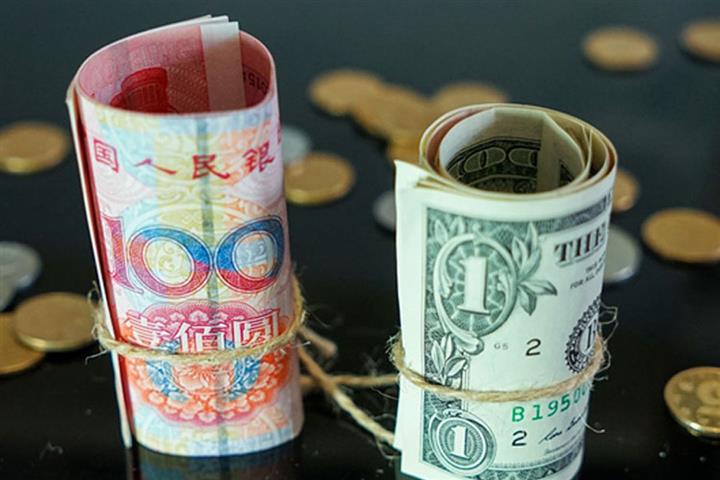 (Yicai Global) July 2 -- Last week, the IMF released an update of its World Economic Outlook. The Fund was downbeat. Already in April, it had forecast an “unprecedented decline” in global economic activity due to Covid-19. However, the pandemic has proven to be worse than expected, resulting in more widespread virus-prevention measures and a more severe downturn.

After taking the most recent economic data into consideration, the Fund further reduced its growth forecasts for 2020 and 2021. It now expects the global economy to decline by 4.9 percent this year and expand by 5.4 percent next year. The level of the world’s GDP in 2021 will essentially be the same as it was in 2019, implying two years of lost growth.

The IMF projects that China’s economy will grow by 1.0 percent in 2020 before rebounding by 8.2 percent in 2021. Average growth of just over 4½ percent, over two years, is rather slow compared to the 6-7 percent China has recently recorded. Nevertheless, China’s forecast performance is actually quite strong, when compared to those of other countries.

The graph below presents GDP indices, with 2019 = 100, based on the IMF’s latest projections. The IMF expects the level of China’s real GDP to be more than 9 percent higher in 2021 than it was in 2019. In comparison, GDP for Emerging Market and Developing Countries, excluding China, in 2021 is slightly below its 2019 level. The forecast outturn for Advanced Countries is even worse, with GDP in 2021 about 4 percent below 2019’s level.

Should the IMF’s forecast come to pass, it will serve to accelerate a two-decade old trend. The solid red line in the graph below plot’s the size of China’s economy, relative to the US’s, at market exchange rates. For 2020 and 2021, I take the Fund’s forecasts for real GDP growth, assume 2 percent inflation in each country and an exchange rate of 7 CNY per US dollar. Under these assumptions, the Chinese economy will be three-quarters the size of the US’s in 2021, up from only two-thirds as large in 2019.

This economic convergence has proceeded a bit more slowly since 2014, as the renminbi (the blue line) has depreciated against the US dollar by close to 15 percent. The red dotted line shows my estimate of the relative size of the Chinese economy, if the exchange rate had remained at its 2014 level (I also make an adjustment for the depressive effect that this appreciation would have had on China’s exports and GDP). This counter-factual suggests that China’s economy would rise to close to 85 percent the size of the US’s in 2021. 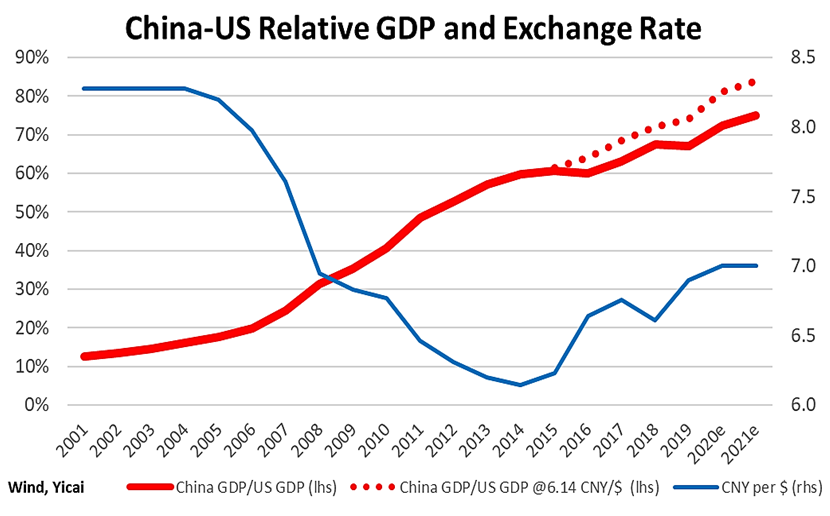 When will China’s economy surpass the US’s?

The dramatic revision of the IMF’s World Economic Outlook, in just six months time, shows how difficult it is to predict the future. Nevertheless, estimating when China will become the world’s biggest economy only depends on five parameters: real growth and inflation in both China and the US and the exchange rate. For the purposes of this exercise, I assume 2 percent for real GDP growth in the US and for inflation in both countries.

China is already the world’s largest economy in purchasing power parity (PPP) terms. What this means is that there are more goods and services produced in China than in any other country. Whereas PPP GDP measures the volume of activity, GDP at current exchange rates measures its value in the marketplace. Market-value measures of GDP are important because they indicate a country’s economic gravity. The greater a country’s economic gravity, the more it will attract international trade and investment and the more pull it will have over global markets.

We cannot be certain when China will become the world’s largest economy at market exchange rates. However, over the next couple of years, it appears that China’s economic gravity is set to increase.