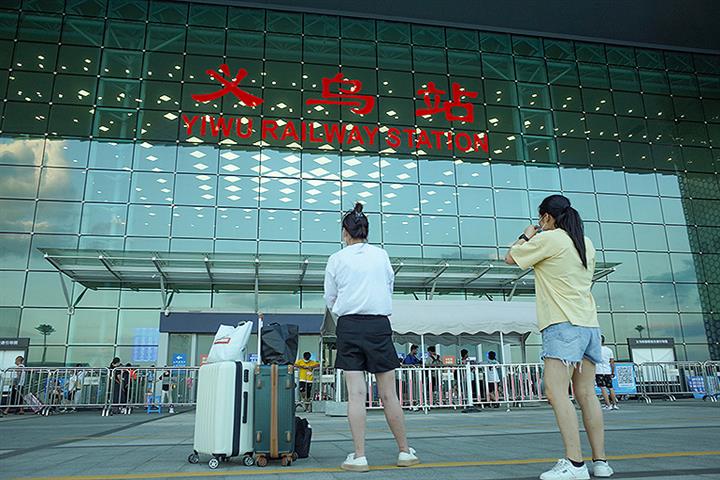 (Yicai Global) Aug. 4 -- The Chinese city of Yiwu, where the world’s largest small commodities market operates from, took steps today to contain another outbreak of Covid-19.

Since the local flareup began on Aug. 2, a total of 70 cases of Covid-19 have been found in Yiwu, after 32 more were reported between 9 p.m. yesterday to 9 a.m. today.

The city, a manufacturing hub in China’s eastern Zhejiang province and home of the world-famous wholesale market Yiwu International Trade City, has not been exempt from the disruption caused to production and business by the resurgence of the virus in China this year. Amid the global pandemic, more and more companies in Yiwu have accelerated the shift to e-commerce.

But Yiwu has now largely stopped shipping goods as even e-commerce customers have suspended sales and shipments due to uncertainty, Li Ting, head of a small local firm, told Yicai Global. Accessories suppliers also said they could not deliver as planned, with one saying “our company is basically in stagnation.”

A freight forwarder said that because his company is not in the main area of the outbreak, it is relatively unaffected for now. The firm is still receiving goods and loading containers, and hopes the outbreak can be controlled as soon as possible.

Yiwu’s Covid prevention and control department issued a notice today saying that non-local people should not come to the city unless necessary, and locals should not leave unless they have to.

Anyone who really needs to leave must present a green health code and a negative PCR test result taken within 24 hours. People also must have 48-hour negative test results in order to enter local shopping malls, supermarkets, pharmacies, medical facilities and restaurants.

Though Yiwu was hit by the Covid flareup in the Yangtze River Delta region from March to May, it foreign trade in the first half of the year still exceeded expectations. Imports and exports passed the CNY200 billion (USD29.6 billion) mark, reaching CNY222.3 billion, a jump of 33 percent from a year ago. Exports accounted for almost CNY203 billion of the total, up 28 percent.

Overseas buyers may see their procurement plans knocked due to the recent outbreak, but the city authorities are eager to keep business running as much as possible. According to their plan, Yiwu will try to attract more foreign procurement and win more foreign trade orders for the local market.