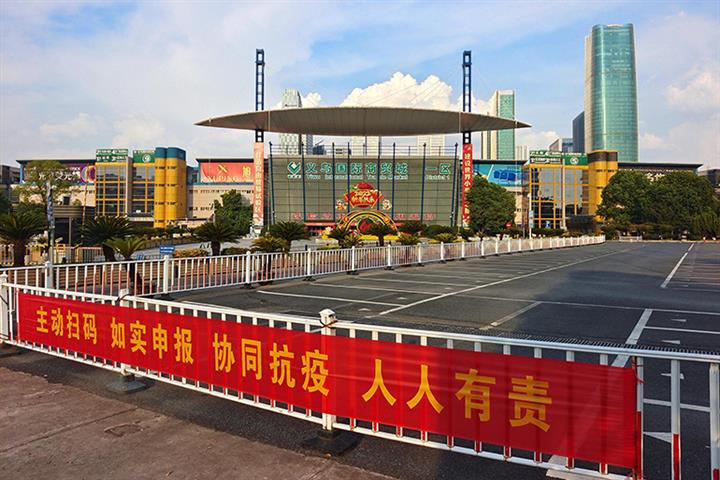 (Yicai Global) Aug. 15 -- Customers with urgent needs are canceling orders with manufacturers in Yiwu, a production hub for small commodities whose exports topped CNY200 billion (USD29.5 billion) in the first half of the year, following a local resurgence of Covid-19 that prompted the Chinese city to extend its lockdown.

With less than 100 days to go until World Cup Qatar 2022 kicks off in November, orders for products related to the sporting event need delivering soon, Chen Xianchun, sales manager at Yiwu Jinzun Stationery and Sports, told Yicai Global yesterday. Some clients can accept a delay, but others who need items urgently have asked for their money back, he said.

To curb the spread of the virus, the manufacturing hub in Zhejiang province announced on Aug. 13 that it would be extending a lockdown imposed two days earlier until there are no new cases for seven consecutive days. As of 9 a.m. yesterday, there had been 630 reported cases since the start of the outbreak on Aug. 2.

An extension of the lockdown for “three to 10 days will not affect customers much, but it can be troublesome if the lockdown lasts for one to two months,” Chen said, adding that his firm’s production and shipments had ceased.

Small commodities made in Yiwu, home to the world-famous wholesale market Yiwu International Trade City, are exported to more than 210 countries and regions. The city’s manufacturers had already largely stopped shipping goods due to the uncertainty brought by the return of Covid-19, the head of another local company told Yicai Global earlier this month.

A manufacturer that specializes in Christmas decorations is operating under a closed-loop system, Li Juan, the person in charge, told Yicai Global. Although the firm applied for permission and can transport goods during lockdown, production is limited as some raw materials suppliers cannot deliver, so items may not be made in time, he added.

Yiwu was also hit by the Covid flareup in the Yangtze River Delta region from March to May, but despite that its foreign trade in the first half still beat expectations at CNY222.3 billion, a 33 percent jump from a year ago. Exports accounted for almost CNY203 billion of that, up 28 percent.