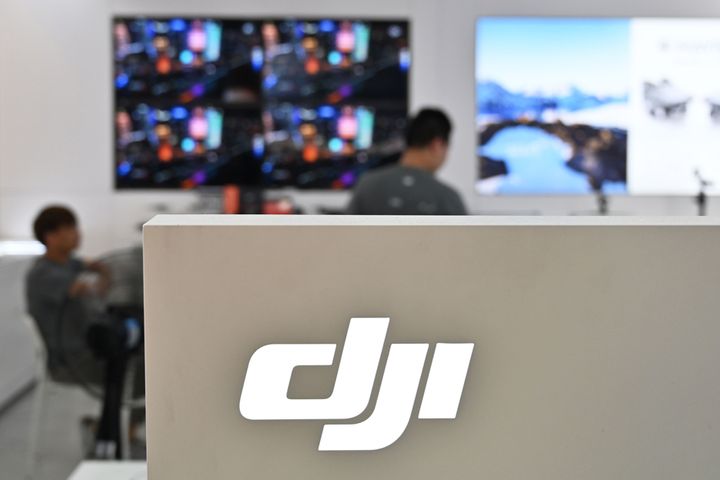 (Yicai Global) May 24 -- DJI Technology, the world's biggest maker of consumer drones, is confident about its competitiveness because rivals are unable to duplicate or replace the firm's core technologies in the short term, according to a senior executive.

"DJI makes each and every one of its drone parts and even writes the underlying code by itself," Xie said. It "has the world's largest research and development team and no drone maker can bypass DJI on patent and research methods."

DJI has applied for 656 patents, ranking it 29th globally, according to the 2018 Patent Cooperation Treaty Review released by the World Intellectual Property Organization. The company had an almost three-quarters share of the global market for unmanned aerial vehicles last year, with that rising to nearly 80 percent in North America, a report from US Skylogic Research shows.

DJI has not only applied for patents for drones and drone bodies, parts and equipment but also enhanced development of key consumer products for farming, delivery and imaging purposes in recent years, Dr. Wang Xin, China president of market research firm Frost & Sullivan, told Yicai Global. Its patent applications for related inventions and utility models have been rising, he added.

"DJI invests a huge amount in R&D every year and has mastered the world's most advanced core drone technologies," Wang said. "What happened to Huawei Technologies and ZTE Corp. is unlikely to happen to DJI."

On May 16, the US added China's Huawei, the world's biggest telecoms equipment maker, to a list of firms that will have a harder time purchasing products from US companies because of security fears. Last year, ZTE almost went out of business after the US imposed a ban, later lifted, on the Chinese telecoms gear maker for its failure to rectify earlier violations of sanctions against trading with Iran and North Korea.

"There are challenges everywhere, and the only thing we can do is march forward and fight them," Xie said.

Earlier this week, DJI reportedly pushed back against a notice issued by the US Department of Homeland Security that suggests the firm's UAVs may be sharing data with authorities in China.

DJI's drone data is totally controlled by its users, the Beijing News reported, citing the firm. DJI has always attached great importance to data protection, and the technical security of its products has been repeatedly verified globally, including by the US government and leading American companies, the report added.

"DJI's most important task is to have a good internal management and organizational structure," Xie said. "Only by constantly improving our products and brand can we continue to retain our consumers' trust."

The company is also speeding up its expansion in the domestic market besides tackling international challenges. Last September, DJI opened a direct-sales store in Nanjing, Jiangsu province, and soon will open a flagship store in Hangzhou, Zhejiang province.

DJI is developing rapidly in China with its image automation products growing the fastest. The firm unveiled a new photography product recently to enter the sports camera market. "DJI dare not say that it aims to boost China's camera market, but it really hopes to produce the country's best cameras in the future," Xie said.

DJI's overseas revenues still make up 80 percent of the total and those from North America take up 40 percent, per data from DJI.