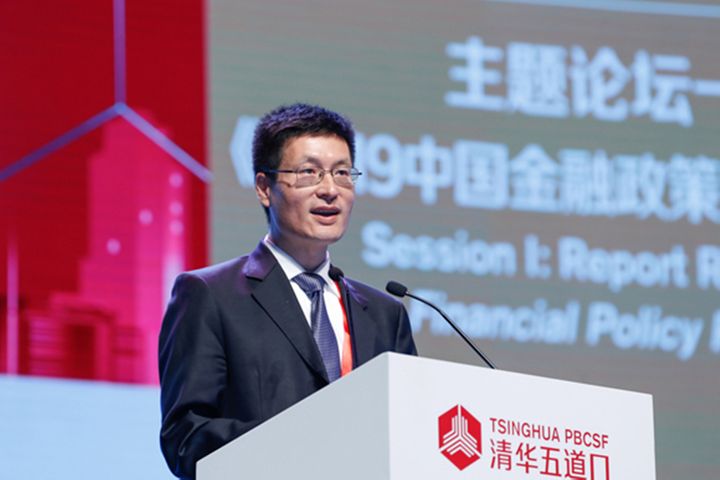 "SAFE will follow through with its stable foreign exchange management policies to meet firms' and individuals' demand for forex," Lu said, referring to the recent weakening of the yuan and the FX volatility.

China's foreign exchange market is more stable than during the years 2015 and 2016 when there were great fluctuations, Lu said. Market players have come to view changes in the yuan exchange rate more rationally and have stronger confidence in the long-term prospects of the currency.

However, US labeling China as a currency manipulator is a serious breach of international standards, he added. It is political manipulation on the part of the US to meet its domestic political needs and part of US strategy in the ongoing China-US trade row.

The following is a transcript from the interview:

Yicai Global: Why did the US label China as a currency manipulator?

Lu Lei: The accusation by the US that China is manipulating the exchange rate has greatly disturbed the financial markets. This is part of US strategy in the ongoing China-US trade tiff.

The US announced on Aug. 1st that it would raise tariffs on goods imported from China. It then identified China as a currency manipulator on Aug. 5th to meet its domestic political needs. This practice disregards the fact that the unilateral tariff escalation advocated by US protectionists has led to a broadadjustment in the international financial markets and contradicts the conclusions drawn in the Macroeconomic and Foreign Exchange Policies of Major Trading Partners of the US issued in May.

The term "spillover effect" is popular and refers to the impact of one country's actions on other countries. After the outbreak of the international financial crisis in 2008, the Federal Reserve employed quantitative easing and increased money supply. Thus the capital supply price dropped in the US domestic market and international markets and the exchange rate fell as the money supply increased. This led to hot money flooding into emerging markets from developed countries after 2008, and the world's major emerging markets saw excess liquidity. This in turn led to the appreciation of exchange rates, currency overshooting and asset price bubblesin emerging market countries, resulting in instability in financial markets and even economic and financial collapse. Therefore it is evident who actually affected and even manipulated the exchange rate.

A basic principle in the market economy is to conduct necessary monetary regulation and macro-prudential management on benchmark prices in the financial market such as the exchange rate and interest rate at the macro level as well as full market competition at the micro level. This is also the normal pattern of economic management in Western countries. China employs a managed floating exchange rate mechanism based on market supply and demand in reference to a basket of currencies. This mechanism is also in line with general international rules and institutional norms.

YG: What does it mean to China to be labelled as a currency manipulator? How will further punitive measures from the US, if there were any, affect China?

Lu: Being identified as a currency manipulator doesn't necessarily mean the country will suffer economic collapse or even depression.

Japan and South Korea were identified as currency manipulators. China was labelled a currency manipulator from 1992 to 1994. In the short term, SAFE must guide and stabilize expectations to avoid impact on the foreign exchange market and it must also pay attention to the real economy as fundamentals are the cornerstone for the currency.

We have repeatedly stressed that we are open to China-US trade talks. Both parties will thrive from cooperation. The industrial chain must be rebuilt on continuous rounds of technological innovation rather than on short-term policies. No short-term policies have ever changed the industrial chain. Looking back on the past few hundred years, the steel revolution, power revolution, and the development of radio, integrated circuits and chips were all unaffected by one or two trade frictions. We must believe in ourselves and the key is to do our own things well.

YG: What impact will the label of "currency manipulator" or further US sanctions against China have on Chinese firms and people's lives?

Lu: Every tariff hike is a quantitative not a qualitative change. China's regulators, citizens and companies are becoming increasingly stress tolerant.

Specifically, China will not restrict normal foreign exchange use by companies and individuals, while ensure the market functions in a sound and stable manner. China will continue to provide support for export and import, profit distribution of listed companies and cross-border investment. Currency transfers abroad will remain available to all individuals' normal and legitimate activities such as tourism, overseas studies. China will open up its foreign exchange market further, facilitate free and convenient cross-border trade and investment, so as to better serve the real economy and expand new horizons of opening-up.

YG: Will trade frictions escalate into currency and financial wars now that China has been labeled a "currency manipulator"? What are the countermeasures?

Lu: First of all, we have not manipulated the exchange rate and we only conduct macro-prudential management over cross-border capital flows, mainly concerning abnormalities and violations.

Also China can handle it even if the China-US trade tiff escalates. Firstly, China's real economy is growing with steady progress and has great resilience. Secondly, the regulatory authorities are very capable and have made sufficient preparations for the worst scenario. We can detect signs before other market participants and make early warnings and preparations. This is the essence of macro-prudential management.

Using market variables, we have been able to take preemptive action and fine-tune certain policies to minimize the shocks borne by the market. Macroprudential management will not turn into capital controls.

YG: What has the regulator done in terms of macroprudential management? How does it deal with the "spillover effect"?

Lu: The People's Bank of China, the China Banking and Insurance Regulatory Commission, the China Securities Regulatory Commission and the State Administration of Foreign Exchange have over the last 10 years put much effort into ensuring the safety and stability of financial market institutions. They have spent a lot of time and effort to prevent and control systemic risks, which is "to stick to the bottom line".

"To stick to the bottom line" is a basic principle that is universally applicable. Both the Federal Reserve and the European Central Bank need to guard their economies against systemic financial risks.

Countries will certainly manage the "spillover effect" to some extent since it leads to systemic risks. The macro-prudential management that prevents hot money shocks has been accepted by central banks since the international financial crisis of 2008. Macro-prudential consists of two concepts. One is to manage the problems that may arise in systemically important financial institutions and the other is to manage the extreme swings in the financial markets.

YG: According to SAFE's data, how have companies, residents and foreign investors been reacting to recent fluctuations in the yuan exchange rate?

First, the supply and demand in the forex market has become more balanced. In the first half of this year, the bank's foreign exchange settlement and sales deficit was USD33.2 billion, and the monthly average deficit narrowed by 52 percent compared with the second half of last year.

Second, the net inflow of overseas capital remains steady. In the first half, foreign investors increased their net holdings of domestic bonds and listed stocks.

Third, the profit return of companies' foreign investments is stable and orderly. The cross-border expenses that fall under the investment income of companies was basically the same in the first half as it was during the same period last year.

YG: How do you see the future China's cross-border capital flows after the recent changes in the financial markets?

First, the world monetary environment is relatively loose. The Chinese bond market has kept a high level of return amid the surging volume of negative-yielding bonds on the global basis. China's 10-year government bond yield is about one percentage point higher than that of the US, which helps attract capital inflows.

Second, the market expects the domestic economy to remain stable. The Credit Default Swap price of Chinese government bonds traded on the international market at more than 40 recently. It was over 60 at the end of last year and was close to 150 at the beginning of 2016. A higher CDS value indicates that the market believes that the risk of default is greater, and the latest reading clearly shows that the world market is generally optimistic about China's economy.

Third, China will further open its market. As the Chinese market continues to open with more favorable business environment, China will remain an attractive investment destination for long-term capitals. China's bond and stock markets are among the largest in the world, yet they remain extremely underweighting the portfolios of overseas investors, accounting for only 2 percent and 3 percent, therefore there is a lot more potential.

So, China's cross-border capital flow has enough tailwinds from home and abroad to cushion external shocks.

YG: With the uncertainties arising from trade frictions adding to the downside pressure on the global economy, this will be a turbulent year for the markets. Have the regulatory authorities done any stress tests? Can China's current exchange rate system, monetary policy and macroeconomic fundamentals with stand the pressure?

Lu: There will be short-term impact, but we have done stress tests and we have the capacity to cope with the potential shocks.

Given market expectations and changes in the exchange rate, the recent short-term adjustment of the yuan's exchange rate is a spontaneous stress response of the financial market to the US's unexpected tariff hike.

But market players, including companies and individuals, have become more rational in their trading behaviors and therefore the short-term impact on market sentiment is not overwhelming. The forex market is in generally good order and the supply and demand of forex has remained basically balanced. Since August, the bank's settlement and sale of forex has shown a slight surplus. The cross-border capital flows of non-banking sectors such as firms and individuals have also been basically balanced.

From the perspective of China's exchange rate policy, keeping the basic stability of the yuan at a reasonable and balanced level will help maintain economic and financial stability.

With the rise of protectionism, the risk to the global growth outlook is to the downside. Trump keeps mounting pressure on the Fed to cut the interest rates more aggressively as many countries have already joined the camp of policy easing. Although the external economic and monetary conditions have become more complex, China, as a responsible big country, will abide by the promise made at the G20 leaders' summit on the exchange rate issue, not engage in competitive devaluation, not use the exchange rate for competitive purposes and not use the exchange rate as a tool to deal with external disturbances such as trade disputes.

China's economic resilience and growth potential will also lay a solid foundation for the basic stability of the yuan exchange rate. China's economy has been growing stably since the beginning of this year. Its BOP has been balanced. The long-term trend of China's economic development and the fundamentals of steady financial development have not changed, all of which bode well for relatively stable Renminbi.