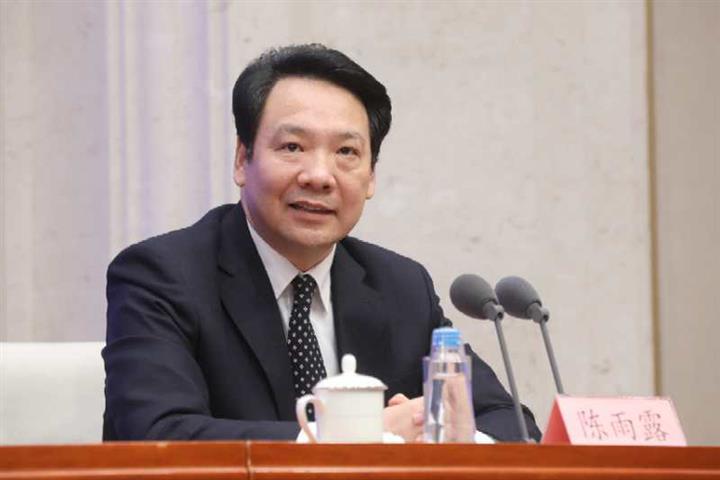 (Yicai Global) March 9 -- China will build a modern central banking and financial system, upgrade its financial infrastructure and further open up its capital markets as part of the 14th Five Year Plan, which runs from this year to 2025, in order to support high-quality economic development and the construction of a modern socialist country, Chen Yulu, Deputy Governor of the People’s Bank of China, told Yicai Global in an exclusive interview.

Below are excerpts from the interview:

Yicai Global: What will be the focus of the modern central banking system in the future?

Chen Yulu: The main task in building a modern central banking system is to establish and improve the two-pillar regulatory framework of monetary and macro-prudential policies.

The focus of improving the modern monetary policy framework is to perfect the money supply control mechanism and to keep the money supply and the growth rate of social financing basically in step with the nominal economic growth rate without resorting to a flood-like stimulus that could erode the purchasing power of people’s savings. The PBOC will continue to enhance the regularity and transparency of monetary policy operations and form an institutionalized communication mechanism to effectively manage and guide expectations. The PBOC will further interest rate liberalization and direct more financial resources to micro, small and private enterprises.

The major goal of establishing and improving the macro-prudential policy framework is to build a mechanism to forestall systemic financial risks. Since the global financial crisis in 2008, major economies were engaged in the building of macro-prudential policy framework which has become a core component of modern central banking. China made early attempt on this front.

YG: In recent years, China has used various monetary policy tools to serve the real economy. However, some structural problems become more prominent. What steps will the PBOC take to build a modern financial system and enhance financial inclusiveness?

Chen: The 14th Five-Year Plan coincides with the second phase of the "two centenary goals," and it also marks a critical period for the establishment of a modern financial system. Under the guidance of the Financial Stability and Development Committee (FSDC) under the State Council, the PBOC will continue to promote the development of the modern financial system, ensure policy actions to get better transmitted to the real economy, support key areas and weak links of the economy, and support the new development pattern of "dual circulation" on the basis of market principles, the rule of law and internationally-accepted rules.

First, the PBOC will build a modern financial institution system. The reform of state-owned commercial banks must strengthen corporate governance to offer better support to the real economy and help small and medium banks as well as rural credit cooperatives develop in a sustainable and healthy manner by improving regulations. In policy-based financial reforms, the central bank will separately manage accounts of policy-based and commercial businesses to enhance their ability to support national strategies.

Second, it will develop a modern financial market system. The central bank will continue to improve financing structure, make great efforts to develop the bond market and multi-level capital markets, raise the proportion of direct financing and strengthen the protection of financial consumption rights by eliminating discrimination and lowering thresholds. During the 14th Five-Year plan period, the PBOC needs to set up an institutional system for fintech’s standardized development and give more play to artificial intelligence, Big Data and cloud computing in enhancing financial inclusiveness.

Third, it will improve the modern financial infrastructure system. High-quality economic development and high-level opening-up to the outside world have put forward new requirements for the convenience, connectivity and security of financial infrastructure. The central bank must unify regulatory standards to operate safely and efficiently, continue to promote the interconnection of such infrastructure at home and abroad and build a management system adapted to two-way financial opening-up.

YG: China has set the "formation of a new system for a higher level of open economy" as a major goal for its economic and social development during the 14th Five-Year Plan. What will the central bank do to achieve this goal?

Chen: China has made break-through in opening up its financial market over the recent years. The PBOC, together with other financial regulatory bodies, has promulgated over 50 opening-up measures to lift restrictions on foreign ownership in domestic banks, securities, futures, fund management and life insurance companies, as well as to give access to credit investigation business, credit rating, payment and bank card clearing services. These measures have expanded the two-way opening of the financial industry and contributed to China’s efforts in achieving high-level opening-up and safeguarding an open global economy. The new development paradigm will require China to open up wider and deeper, and to promote institutional opening up to build a new system for a higher level of open economy.

The PBOC will look up to high international standards, accelerate the formation of pre-establishment national treatment and the negative list system as well as open the capital markets to be more market-oriented, legal and international. It will pay more attention to the prevention and control of financial risks, shore up areas of weakness in the regulatory system as soon as possible and make financial regulation more targeted to match regulatory capabilities with the level of opening-up.

Second, it will steadily advance capital account convertibility as demanded by the market, prudently promote the internationalization of the Chinese yuan and improve the country’s ability to manage an international currency.

Third, it will improve and stabilize global industrial and supply chains on the basis of serving the real economy to support the nation’s new pattern of dual circulation development.

Fourth, it will continue to strengthen financial exchanges and cooperation with foreign countries. The central bank will enhance international coordination of monetary policies and not instrumentalize exchange rates or perform competitive devaluation. The PBOC will play a supporting role in financial opening-up and provide long-term and stable financial support for the construction of the Belt and Road initiative by promoting the use of local currency.