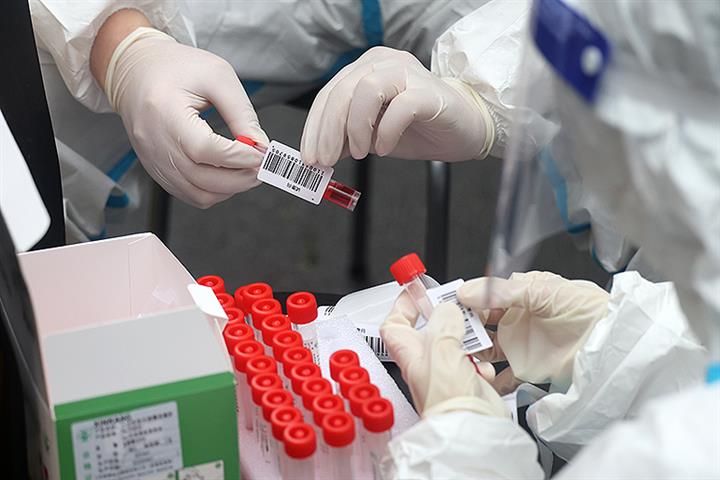 As big cities' testing demand has surged, new third-party testing institutions have mushroomed with higher capacity and lowered prices. But signs of overheating are visible as cities such as Beijing and Shanghai have recently reported inaccurate testing results. Moreover, the city of Hefei in Anhui province has punished illegal agencies.

The first-tier cities of Beijing, Shanghai, Guangzhou, and Shenzhen have 163 qualified third-party nucleic acid testing agencies. Beijing and Shanghai both have nearly 60 such companies, according to public information.

Looking at the numbers is a good indicator of quality. Only financially strong testing agencies can complete large-scale testing tasks on time while maintaining good quality, a source from a nucleic acid testing device supplier told Yicai Global. Building a temporary lab with a capacity of 10,000 tubes per day costs between CNY4 million and CNY5 million (up to USD736,346). Meanwhile, building a mobile makeshift lab costs about CNY30 million.

Moreover, regional governments have set their own parameters. Nucleic acid testing agencies must deliver samples to labs in one hour and give the results within six hours after collecting the samples, according to the current requirements.

The virus is getting faster and less symptomatic in its moves. The Omicron variant poses higher requirements on testing speed because the variant spreads more rapidly, a source from a nucleic acid testing firm in northeastern China said to Yicai Global.

The intensifying competition is affecting test prices and consequently, medical firms' profitability. In central China's Wuhan, taking a Covid-19 test cost around CNY90 (USD13.30) in May 2020 amid the first waves of the pandemic. In Beijing in October 2021, a test cost CNY58, according to public information. In Shanghai, prices have declined to just CNY25 per test last month while those for combined tube tests cost as low as CNY5 (70 US cents) per person.

As the workload is increasing, mistakes happen. "Some inexperienced testing agencies have a wrong estimate of their testing capacity before taking large-scale testing tasks, leading them to neglect quality control when racing against time to finish,” said the above-mentioned source from northeastern China.

Some of the labs are very fresh. Five of Beijing's 58 testing agencies were set up after 2020. In Shanghai, the figure is 10. Beijing's Zhaoan Clinical Laboratories was established on April 26 and it has already begun testing people, Yicai Global learned.

China has 13,000 healthcare institutions with 153,000 employees qualified to do nucleic acid testing, Guo Yanhong, a supervision specialist at the National Health Commission, said recently. The institutions can test as many as 57 million tubes per day, she added.

Some 99.7 percent of the tests done in labs are accurate based on more than 35,000 cases of external quality assessment, according to Guo.