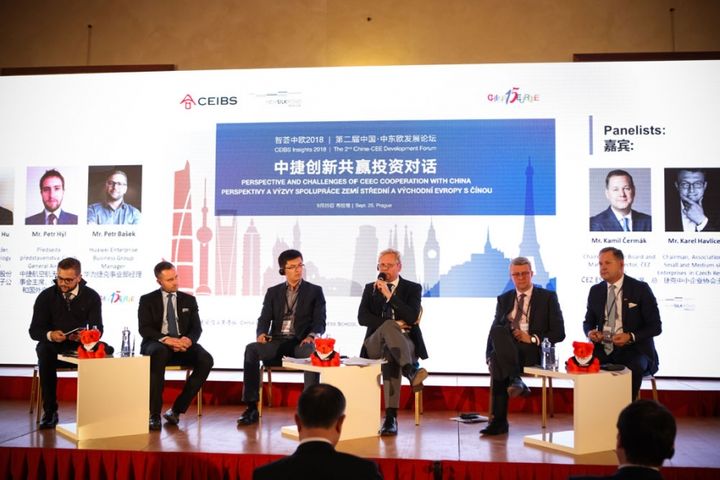 (Yicai Global) Sept. 26 -- The historic Prague Castle was the venue for a frank and fruitful discussion on how China and the countries of Central and Eastern Europe can work together to drive mutual economic growth. Attended by about 200 participants, the event saw keynote speeches from China's new Ambassador to the Czech Republic, H.E. Jianmin Zhang; Governor of Czech National Bank, Mr. Jiří Rusnok; President of the New Silk Road Institute Prague and Adviser to the President of the Czech Republic, Mr. Jan Kohout; CEIBS President, Professor Li Mingjun; and CEIBS Professor of Economics and Finance, Xu Bin. It was co-organised by China Europe International Business School (CEIBS) and the New Silk Road Institute Prague.

In his first official speech as China's Ambassador to the Czech Republic, H.E Jianmin Zhang spoke of the need for both countries to work together, especially with the rise of unilateralism and protectionism in some parts of the world. "The trade war has led to tensions in economic and trade relations among the big powers and the uncertainties have increased. China has always adhered to the principles of multilateral trading system and free trade… We will open up even further to the outside world," he said. He noted that Sino-Czech relations have been "developing well" with data showing that two-way investment is growing rapidly. The next step, he said would be to accelerate collaboration between both sides.

The issue of collaboration between the two countries was also touched upon by Jan Kohout who is also former Deputy Prime Minister and Minister of Foreign Affairs for the Czech Republic. He spoke of the gains already made but also noted that there was "still a lot to be achieved" and suggested areas in which both sides can deepen their collaboration. A lot of Chinese investors, he said, were interested in infrastructural projects, acquiring IT and high-tech companies, as well as selling their goods in the wider CEE market. "We also have expectations for China to open up their markets more. Over the past few years we have had a mutual understanding. We should also be clear about our long-term strategy as well as the laws and regulations," he said. "We have been making progress. Today's forum will be a great platform where we can exchange ideas that might lead to inspiration for future collaboration. One possible outcome of this forum is future projects. We welcome Chinese investors to the Czech Republic, especially in the previously mentioned areas." He also spoke of his country as a source for high-quality labour, its interest in gaining access to the Chinese market and the potential for both countries to collaborate in R&D.

Governor of Czech National Bank (CNB), Jiří Rusnok also spoke of how both countries are working, and can continue to work, together in the field of finance. The working relationship which began in 2010 with an MOU between China Banking Regulatory Commission (CBRC) and the CNB – one of the first the CBRC signed with an EU supervisory authority – deepened in 2016 when crisis management was added to its scope. In his speech, Mr. Rusnok outlined policies needed to ensure, going forward, mutual financial stability under the China-led Belt & Road Initiative (BRI). He also spoke about how the financial markets of both countries can deepen their collaboration. "We need a solid banking system, we need to reduce the negative factors for the protection of consumers and we also need financial literacy," he said. He then gave examples of the benefits seen from the CNB's system of "integrated supervision" which allows for a focus on systemic risk, information-sharing synergies, strong technical and professional support, and autonomous decision-making. There is also consolidation of financial market regulation, and supervision at the national level that creates conditions for the effective exchange and integration of relevant data, and potential consolidation of analytical work. "We are working with our Chinese counterparts on knowledge and experience sharing, for example on topics such as financial stability," he said. "I firmly believe we can work together to share more experience between us."

Areas of future potential cooperation between China and the Czech Republic, he noted, could include financial stability and stress-testing; supervision of the consumer credit markets and non-banking financial sector; as well as macro-prudential policy that could prevent bubbles in asset markets, build up sufficient capital buffers, and see a coordination with monetary policies. He also spoke of the challenges ahead that may constitute hurdles to his vision of cooperation, including what he described as a "substantial imbalance in mutual trade", less transparent governance and ownership structures of some Chinese entities, and unclear investment strategies of some Chinese investors. "Future Czech-Chinese relations should be mutually beneficial," he stressed. "We truly welcome the initiative taken by China to open up their market further to the outside world. We believe this could help us to promote our cooperation further."

The theme of a mutually beneficial relationship was continued by CEIBS Professor of Economics and Finance, Xu Bin who used economic data to provide lessons China and the Czech Republic can learn from each other and highlight how they can collaborate. He pointed to similarities between the two countries: services account for a large share of their GDPs and help both countries maintain low unemployment levels, both are very attractive to outside investors, both are still growing (relatively) very fast and economic growth in both is being driven by capital and technology. After providing a macro-economic comparison of both countries Prof. Xu then highlighted six things China can learn from the Czech Republic including how to urbanise but still preserve its cultural heritage; how to improve trade in services; how to provide healthcare to an aging population; finding the right balance in taxes on income, profits and capital gains; how to tackle air pollution; and successful management of exchange rate and other financial sector issues related to international trade and foreign direct investment.

The forum comes at a historic moment in time: the 40th year of China's reform and opening up, the 15th anniversary of the China-EU Comprehensive Strategic Partnership, and the 5th anniversary of the Belt & Road Initiative. China regards the CEE as a potential driver of European economic growth, as well as a significant partner and destination for investment and, as CEIBS President Professor Li Mingjun noted in his welcome speech, the Czech Republic is a major component of China's relationship with the CEE. "Since [China's] President Xi Jinping's visit to the Czech Republic in 2016, the political, economic, and cultural exchanges between both countries have continued to advance and bilateral trade has developed healthily. China is the Czech Republic's largest trading partner outside the EU and the second largest source of imported goods in the Czech Republic; meanwhile the Czech Republic is China's second largest trading partner in Central and Eastern Europe," he noted. "Under the vision of China's 'One Belt, One Road' initiative and '16+1 cooperation', building on the momentum of the 'Golden Age' of Sino-Czech relations, we are here today full of hope, to provide a platform for an exchange of views and cooperation between enterprises." He also spoke of the work CEIBS has already done in this regard, such as last year's collaboration with the SINO-CEE Fund to launch the ERICEE, an initiative that has seen CEIBS' academic collaboration with the 16 countries of the CEE, its national-level think tanks, and renowned business schools, and providing intellectual support to the relevant state departments for cooperation in the CEE. All these efforts are complemented by the Prague forum, which is a "bridge to work with European partners to promote business cooperation between China and Europe," said Prof. Li.

The day ended with a panel discussion on "New Space for China-Czech Cooperation" which saw input from Chairman of the Board and Managing Director at ČEZ ESCO, Kamil Čermák; Chairman of the Association of Small and Medium-sized Enterprises of the Czech Republic, Karel Havlícek; Country Manager at Dahua Technology Czech s.r.o, Zhenyu Hu; Chairman of the Board at Czech General Aircraft, Petr Hýl; and Business Group Manager of Huawei Technologies (Czech), Peter Basek.

The forum is one of five being hosted by CEIBS, China's leading international business school, with partners across Europe. The events are part of the wider CEIBS Insights 2018 initiative, launched to mark the 15th anniversary of the China-EU Comprehensive Strategic Partnership by observing the role that CEIBS has played and continues to play in fostering Sino-European ties. Prior to the Prague event, CEIBS hosted forums in Munich and London on July 17 and 19, respectively. The next events in the CEIBS Insights Europe Forum 2018 series will be held in Paris on October 19 and Zurich on October 24.

China Europe International Business School (CEIBS) is among the top international business schools in Asia, where it is the only one to have simultaneously made it to the Financial Times' top 30 list of MBA, EMBA, and Executive Education programmes.

CEIBS has more than 20,000 alumni from more than 80 countries worldwide, and has provided a broad range of management programmes for more than 150,000 executives both at home and abroad. CEIBS' faculty team is uniquely equipped to deliver a combination of China Depth and Global Breadth in both teaching and research.

CEIBS has campuses in Shanghai, Beijing, Shenzhen, Zurich, and Accra.