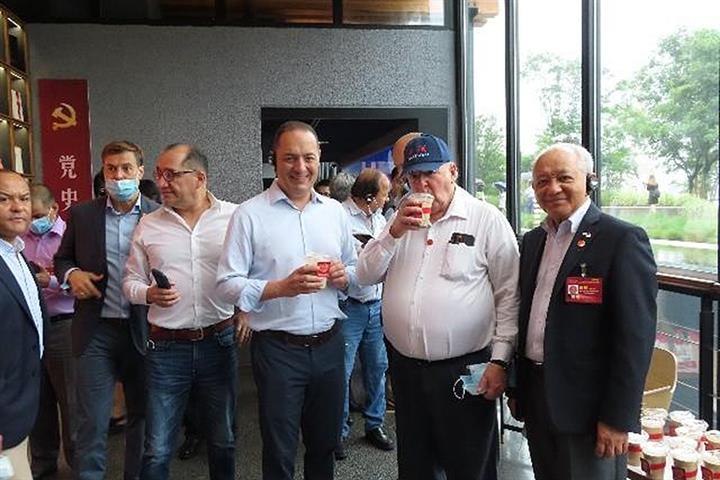 (Yicai Global) June 18 -- Ambassadors to China from more than 40 countries attended a special event in Shanghai this week illustrating the striking transformation of the city over the past 100 years.

The event “The Story of the Communist Party of China--The Practice of Xi Jinping's Thought on Socialism with Chinese Characteristics for a New Era in Shanghai” was held on June 16 along the newly developed Yangpu waterfront north of the Bund.

Li Qiang, secretary of the Shanghai Municipal Party Committee, talked about the changes along the city’s two main conduits, the Huangpu River and Suzhou creek. More than 170 years ago, both sides of the two rivers were busy docks for merchant ships and Chinese and foreign trade. China’s earliest modern waterworks, shipyards, gas plants and spinning mills all emerged here, he said.

After the founding of the People’s Republic of China in 1949 and the advancement of industry, the two rivers’ significance in the economic development of the country waned. Shanghai has since adjusted the urban layout along the river banks and promoted the development of public spaces. Century-old factories and warehouses have been restored and transformed into art galleries, museums and other open areas.

As a result, the rivers have become nice places for people to relax. The urban planning exhibition hall along the Yangpu waterfront has become a landmark, attracting an average of one thousand visitors a day.

“This is amazing. To give citizens a better life, the government has done a lot of work to transform the function of original buildings and give them a new look,” Luis Schmidt Montes, Chilean Ambassador to China, told Yicai Global after a visit to the exhibition hall. This is his second visit to the Yangpu waterfront and there is still a lot that he wants to see, he added.