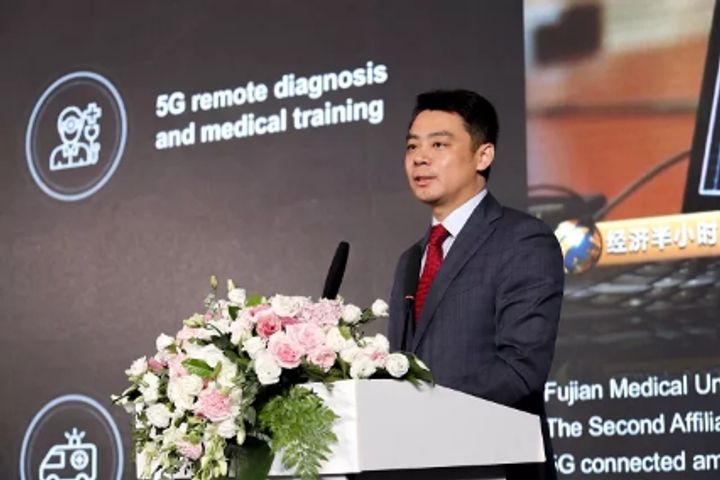 (Yicai Global) Oct. 11 -- Every 10 years a new generation of mobile communications technology is developed. Now, the era of the fifth-generation wireless network is upon us. Chinese tech giant Huawei Technologies' chief marketing officer has pondered the challenges of staying at the forefront of 5G global deployment and says innovation is key.

How will 5G change society, and are the anticipated business scenarios in line with reality? How can Huawei take a leading position in 5G despite US' efforts to block the company? New technologies will inevitably face difficulties and challenges. How can the firm use innovation to rapidly deploy 5G networks?

These are some of the questions Peng Honghua, CMO of the firm's Wireless Network Product Line, discussed in his keynote speech Unite and Innovate to Usher in the Decade of 5G delivered at Huawei's fifth Asia-Pacific Innovation Day in Chengdu last month.

The Shenzhen-based firm has already signed more than 50 5G commercial contracts and delivered over 200,000 base stations worldwide. It is committed to providing leading end-to-end 5G products and solutions, to bringing the best 5G technology into people's lives and to creating greater social and economic value through teamwork with network operators.

"The 1G and 2G networks shortened the distance between people enabling them to connect with each other using voice and short messages," he said. "The 3G and 4G networks enriched the ways in which people communicated with each other through the mobile internet and video. The 5G network will bring people into an interconnected smart world through its ubiquitous connecting capability."

Take 5G plus new media as an example. China and the UK have made 4K/8K live broadcasts using 5G technologies. Conventional live broadcasts require a production truck worth between CNY50 million (USD7 million) to CNY80 million and 150 field staff for recording, editing and broadcasting. The cost of satellite transmission is also quite high.

When 5G is applied in new media, a photography backpack with a 5G central processing element worth less than CNY10,000 (USD1,400) can greatly reduce costs, and only five staff members need to be on site. Image data is transferred to the television station via the 5G network. Flexible machine positioning and real-time interaction with remote sets are transforming how conventional media makes live broadcasts.

With the setting of new standards, the growing maturity of the industrial chain and the accelerated preparation of frequency spectrums and end terminals, the worldwide commercial use of 5G is gaining pace. Some 56 operators from 32 countries have announced plans to deploy 5G technology in their existing networks and 39 of them have announced the release of 5G services under the Third-Generation Partnership Project, an organization that develops protocols for mobile telecommunications, the Global Mobile Suppliers Association said in its August report.

The GMSA predicts that more than 50 countries and regions will issue 5G-related spectrums this year. 5G is the first mobile communication era in which terminals and networks mature simultaneously, and 100 types of 5G terminal devices have been released globally.

5G deployment in Asia Pacific is ahead of the rest of the world. For example, South Korea is the world's first country to achieve large commercial use of 5G networks and has accumulated more than two million users since the first SIM cards were released in early April.

China will certainly become the world's largest 5G market. This was already the case in the 4G era, Peng said. China has 4.37 million 4G base stations and 1.2 billion users. The country's three major carriers started 5G network deployment and tests in 50 cities across 30 provinces after the release of 5G licenses in June. The scale of 5G construction in China tops the world. The three operators completed the construction of 38,000 5G base stations in July and will build 130,000 more by the end of the year.

Huawei will use its advantages in 5G technology together with its global pre-commercial and commercial-use experiences to serve Chinese operators and help China's 5G network lead the world, he added.

The first innovation is Massive MIMO. Previous networks used two transmit and two receive, or 4T4R, while 5G uses 64T64R. Through significant improvements in spectrum efficiency and network performance, Massive MIMO has achieved the target of one gigabyte per second anytime and anywhere via large bandwidth and multiple antennas. Huawei has maintained an absolute leading position in the Massive MIMO market, accounting for more than 90 percent of global shipments.

"We started research and development of Massive MIMO back in the 4G era, and we continue to make new innovations, such as introducing artificial intelligence to dynamically adjust network parameters to match traffic changes and different scenarios," Peng said. "Therefore, the performance of 5G networks is far superior than before and is able to meet the needs of new businesses."

"In the third phase of the IMT-2020 test, Huawei's 5G network that is based on 64T64R Massive MIMO reached a record-high community peak speed of 14.58 gigabytes per second, which is nearly 100 times higher than that of the 4G era," he said.

The second is the 5G ultra-lean site. Seeking a site is difficult and they can be expensive. Intensive 5G networking means more sites are needed. Huawei has introduced ultra-lean site solutions such as Easy Macro and Book RRU which only require access to electricity and are suitable for various scenarios especially minimalist deployment in remote areas of a large site or high-traffic locations such as roads, high-rise buildings, residential and scenic areas. A large number of sites are available for use in the world. China has over 12 million poles available for carriers to provide better network coverage, according to Huawei.

These three innovations solve difficulties in network construction and enable better performances in all scenarios of 5G coverage. At the Huawei Asia-Pacific Innovation Day held on Sept. 3, Huawei and China Unicom's Sichuan Branch released the 5G Multilayer Network solution. This uses the above three innovations to give full play to the advantages of mobile site resources in Sichuan province and build a three-layer network architecture to achieve full 5G coverage.

Huawei was subject to a full-blown attack from the US just as its 5G program was about to get underway. The US lobbied countries around the world to exclude Huawei from 5G network contracts and placed the firm on the so-called Entity List for security reasons without any evidence. It attempted to put a chokehold on the firm's growth, but Huawei was not been defeated. Instead, it made some adjustments and gained speed. Its recent shipment of 200,000 5G base stations is proof of this.

"The US is pressuring the world, but has it succeeded?," Huawei founder and Chief Executive Ren Zhengfei said in a recent interview with foreign media. "We don't mind which country buys our products. Our supply already cannot meet demand."

Most of Huawei's most advanced equipment has no US parts. Once the firm replaced US parts with its own parts, efficiencies were 30 percent higher, Ren added. Around 600,000 5G base stations are expected to be shipped this year and at least 1.5 million next year.

Huawei has invested almost USD4 billion in the commercialization of 5G end-to-end systems. It developed a technique test prototype in 2012 and a system test prototype in 2017. Over the last year, it has released a series of 5G commercial products including the world's first 5G base station chipset Tiangang as well as the 7nm 5G baseband chipset Balong 5000 which has broken multiple world records, Peng said.

Huawei has always adhered to the philosophy of "keeping complexity to itself and leaving simplicity to customers," according to Peng. "You can see the product, but you can't see the technology beneath the surface. Our key innovations in chips, materials, algorithms, antennas, heat dissipation and other fields have laid the foundation for 5G minimalist network structure and extreme experiences."

Huawei has been fully involved in the development of 5G standards since an early stage. So far, the company has contributed more than 21,000 5G NR proposals to 3GPP, accounting for more than 20 percent of the world's total and ranking first. If printed out, this stack of papers would reach 10 meters high.