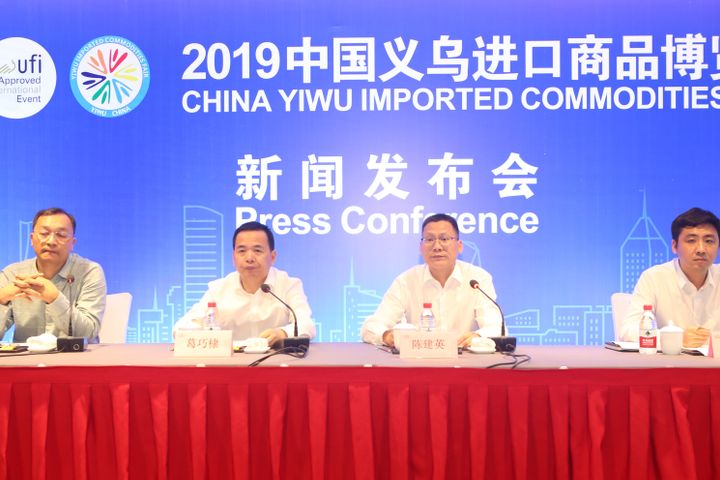 (Yicai Global) May 23 -- The 2019 China Yiwu Import Commodities Fair opened today in Yiwu, a city in the east of the country made famous by its wholesale market selling small goods ranging from artificial flowers to country flags and Donald Trump masks.

Yiwu is home to the world's largest wholesale market of small commodities, and exports to more than 200 countries and regions. The 13,052-kilometer Yiwu–Madrid railway line, which opened in 2014, runs container trains from Yiwu through Kazakhstan, Russia, Belarus, Poland, Germany, France to Madrid, Spain's capital.

The 2019 China Yiwu Import Commodities Fair has attracted exhibitors from 85 countries and regions, who are showing off more than 100,000 kinds of imported goods under the theme 'buy and sell globally in the world's capital of small commodities.'

A total of 170 companies from 40 countries along the routes of the Belt and Road Initiative have brought products, including daily necessities, handicrafts, and food and beverages to the trade fair. Well-known firms such as the Philippines' largest sock maker Burlington, Thailand's third-largest rice exporter Seleco, and Iranian brand Bordbar, known as the Chanel of the carpet industry, are showcasing new products and innovative processes.

Also held during the exhibition is the 2019 United Cities and Local Governments Asia-Pacific Executive Bureau Meeting and Dialogue on International Cities' Economic and Trade Cooperation under the Belt and Road Initiative. It provides an opportunity for more than 360 political and business representatives and scholars from 79 cities and organizations in 41 countries to get together for talks.