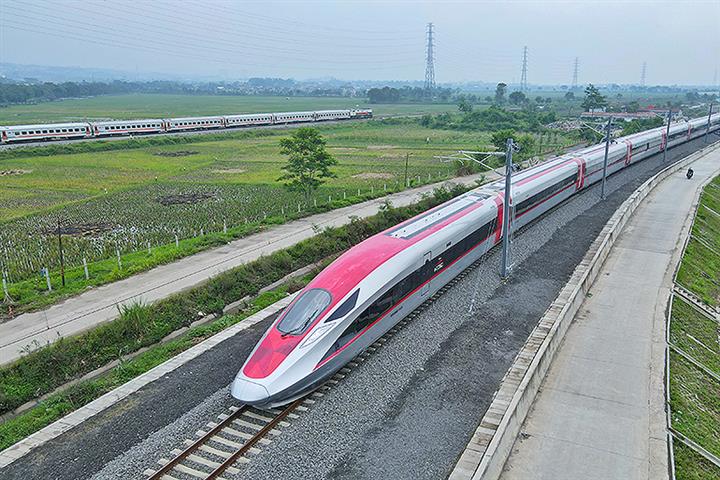 (Yicai Global) Nov. 16 -- Southeast Asia’s first high-speed railway line, built by China Railway International, will be put into trial operation during the gathering of world leaders at the ongoing G20 summit in Indonesia.

The Jakarta-Bandung High-Speed Railway connects the Indonesian capital, Jakarta, with the country’s fourth largest city, Bandung, slashing commuting times from over three hours to around 40 minutes, the Indonesian government said. With a maximum speed of 350 kilometers an hour, it is expected to be put into operation next year.

Indonesia is hoping to attract more overseas investment by showcasing the Jakarta-Bandung High-Speed Railway during the 17th G20 summit in Bali and in this way emphasizing its achievements in infrastructure and economic development, Zhou Shixin, director of the Peripheral Diplomatic Office of the Foreign Affairs Policy Institute at the Shanghai Institute for International Studies, told Yicai Global.

China Railway, which is the driving force behind the world’s largest high-speed railway network in China, won the bid for the project from the Indonesian government in October 2015. It is the first overseas bullet railway based entirely on China’s high-speed railway systems and industrial chain.

As part of its pledge to take bullet railways global, China is transferring its high-speed rail technology to Indonesia, encouraging local production and helping to train managers and other workers.

Construction across the island of Java's rugged terrain proved a challenge for Chinese engineers. Only a quarter of the railway line runs along flat land, with bridges accounting for 61.5 percent of the track and tunnels 11.7 percent. There are 58 bridges and 13 tunnels along the 142 km-railway line.

As of Nov. 13, all 13 tunnels had been blasted through, more than 92 percent of the track bed and stations had been built, and the slabs for the ballastless track are now being laid, according to Xinhua New Agency.