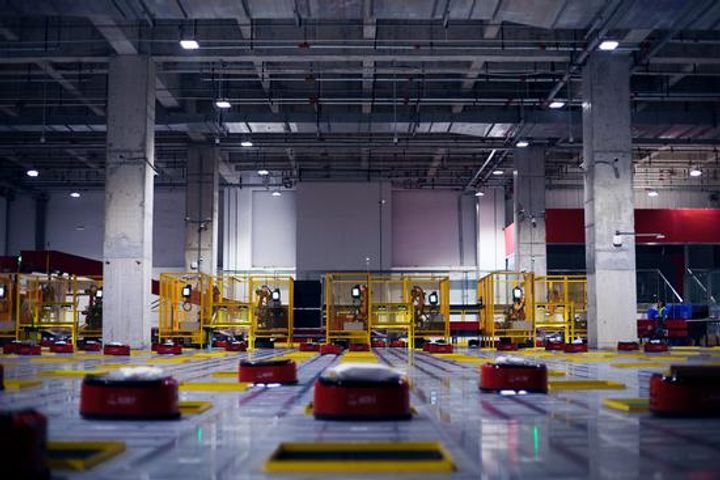 (Yicai Global) May 25 -- JD.Com Inc., one of China's largest e-commerce players has opened the doors to its unmanned warehouse in Shanghai's Jiading district to the media for the first time.

The areas surrounding the unmanned warehouse is quiet with few people walking around, but the inside is another story. The 40,000-square-meter unmanned facility mainly undertakes two functions -- warehousing and sorting. Robots and robotic arms are used during the entire process.

JD opened the world's first fully-unmanned storage facility last October, covering 40,000 square meters and capable of handling up to 200,000 items a day. The company is not alone in its pursuit of automation with fellow logistics heavyweights SF Holding Co. and Alibaba Group Holding Ltd.'s Cainiao also investing heavily in the sector. The stream of investment in unmanned technologies in China's sector has been driven by continued rapid growth in the country's e-commerce sector, which parcel volumes doubling every two years.

Over one thousand robots are deployed in the warehouse and various advanced technologies including 3D imaging-based storage, automatic packaging, artificial intelligence as well as Internet of Things. The staffless warehouse can handle goods-receiving, storage, sorting, packaging, classifying and goods-dispatching tasks for most types of products without the help of humans, Zhang Genyun, chief logistics planner at JD told Yicai Global.

Though JD.com hopes that its unmanned warehouse will be able to handle all types of products, the warehouse currently mainly deals with electronics. "Each product category has its own characteristics," Zhang said. "You need to make tailored arrangements [for each category] and consider overall costs, efficiency and experience."

The unmanned warehouse does not use any human workers for processes such as receiving goods into the warehouse, scanning, packing, sorting, and dispatches.

Compared with traditional warehouses, unmanned warehouses can significantly reduce labor intensity of workers and are 10 times as efficient as traditional ones, Zhang said.

The Cost of Automation

There is much debate about how much more unmanned warehouses will cost compared to traditional facilities as the application of robots and new technologies increases.

"What best reflects the unmanned warehouse's wisdom is not its ability to operate and execute as instructed but its ability to make independent decisions, judgments, correct errors and restore itself," Zhang said.

For example, data related to delivery notes, packaged objects and barcodes are collected and recognized by the unmanned warehouse's systems. The warehouse can make judgments and handle problems itself when an abnormality occurs.

However, there are still human workers at JD's unmanned warehouse. In addition to inspectors, three employees were tying large bags before large automated guided vehicles sent big parcels onto the conveyor belts so that they will be delivered to distribution sites, Yicai Global observed.

Human workers are needed because these bags are irregular in shape, making it difficult for machines to handle them, on-site workers said, adding that machines will also be used in the future.