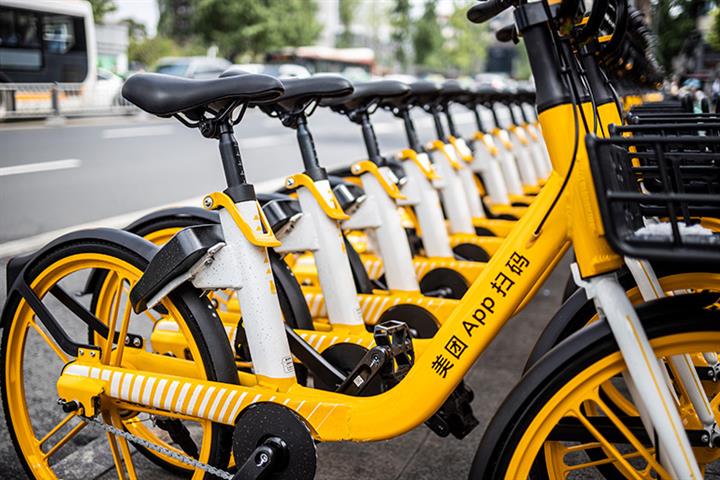 (Yicai Global) Aug. 8 -- Meituan, a Chinese behemoth of on-demand services, will raise the prices of its bicycle-sharing passes by as much as 50 percent amid increasing operating expenses.

From Aug. 10, a seven-day Meituan Bike pass will cost CNY15 (USD2.20) instead of CNY10, the Shanghai-based company announced recently, birthing a trending topic on social media. A one-month card is valued at CNY35 as it used to be CNY25. A 90-day subscription will cost CNY90 instead of CNY75. It is unclear whether the firm will subside rides to cushion the effect.

China's other two leading bike-sharing brands, Didi Chuxing's Qingju and Ant Group-backed HelloBike, have not reacted to the news yet.

Operating expenses are surging. Raw materials for bicycles got 10 percent more expensive in the first quarter of this year than they were a year ago and such pressures are passed onto downstream parts of supply chains, according to data from the China Bicycle Association.

Shared bikes have become costly to Chinese internet companies after their initial excitement. After several brands popped up, prices were as low as CNY0.5 (7 US cents) per 30 minutes in 2016. But prices were gradually hiked to about CNY4 (60 US cents) per hour.

For internet firms, bike-sharing is about driving user traffic but as losses got heavy, they restructured such business units. In Meituan, revenue stemming from shared bikes is packaged with other new business segments such as group-buying platform Meituan Select and grocery marketplace Meituan Maicai which are more profitable.

In the first quarter, Meituan's new business segments made CNY14.5 billion (USD2.1 billion) in revenue, up 47 percent from a year ago, according to the firm's earnings report. But such loss increased to CNY9 billion from CNY8 billion (to USD1.3 billion). The corresponding negative operating margin was 62.3 percent.

Rivals are not doing much better. HelloBike has been recording a loss from 2018 to the first quarter of 2021, its prospectus shows. The bicycle company's loss tallied CNY4.8 billion (USD710 million) in the three years ended 2020, and the highest annual figure was over CNY2 billion (USD296 million).