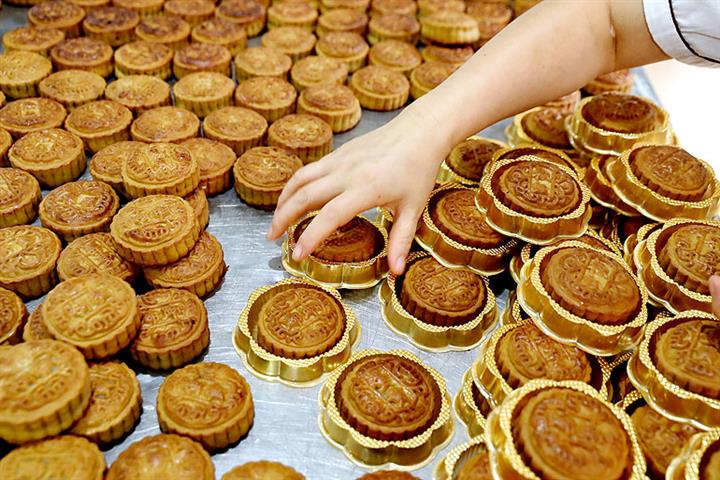 (Yicai Global) Sept. 25 --On October 1, Chinese people will celebrate the Mid-Autumn Moon Festival. The Festival falls on the 15th day of the 8th month of the Chinese calendar, the first full moon after the autumn equinox. On this night, the moon is at its largest and fullest.

Like Thanksgiving in North America, the Mid-Autumn Moon Festival is a time for families to reunite. Those who cannot be together take solace in going outside, looking up and admiring the same moon at the same time as their loved ones.

Mooncakes are the Festival’s traditional food. These round pastries are flavoured with a variety of sweet or savoury fillings. I am partial to Chinese date, while most of my colleagues at the Yicai Research Institute prefer egg and lotus paste.

Giving mooncakes to key business associates has become de riguer and firms often offer mooncakes to their employees as a holiday perk. While mooncakes come at all price points, those offered to impress contacts can sell for USD50-USD100 per box. First-class mooncakes are not only made with the best ingredients but are also extravagantly wrapped. Indeed, the Chinese authorities have explicitly called for limiting wasteful packaging.

Even though the Mid-Autumn Festival period is short, the imperative to give mooncakes makes these little pastries big business.  In 2019, China produced 1.4 billion mooncakes worth CNY19.7 billion (USD2.8 billion). Figure 1 shows that the value of mooncake sales rose by 50 percent in the last five years. 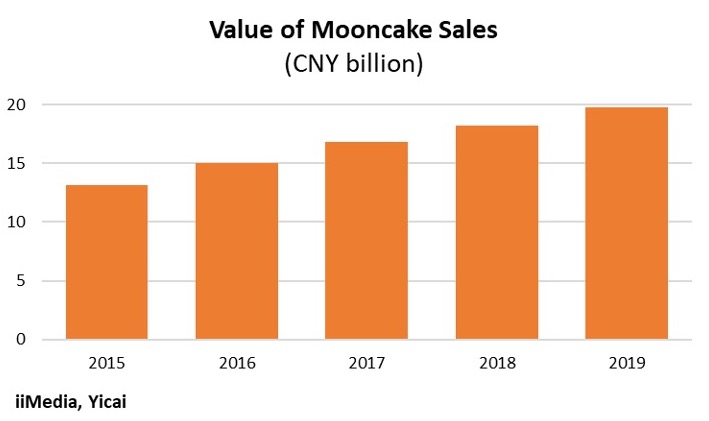 It can be very profitable to produce mooncakes and every year thousands of new mooncake bakeries are registered. About 80 percent of the mooncake bakeries are small Mom and Pop operations, with less than CNY1 million in capital. Foreign firms are also players in this market, with mooncakes from Starbucks, Haagen Dazs and KFC being particularly sought after.

It is not unusual for people to receive a dozen boxes of mooncakes from their contacts, employers, friends and relatives. While people like to eat a mooncake or two, these delicacies are quite rich – some say that a mooncake has the same calories as four bowls of rice. So, many people pass on their unwanted mooncakes, giving the best quality ones to their parents and grandparents and the lower quality ones to friends and acquaintances, many of whom are already trying to get rid of the mooncakes they have received. With everyone receiving so many mooncakes in such a short period of time, the mooncake market is typically in excess supply, as the premium put on giving exceeds the market’s capacity to digest these gifts.

The rebalancing of the supply of and demand for mooncakes has been ingeniously solved through the creation of the mooncake coupon. In many cases, paper coupons are given instead of the actual confections. The coupons can be redeemed at the issuing bakery or hotel for a box of mooncakes. The portability of these coupons has also facilitated the creation of a vibrant secondary market.

As the mid-autumn festival approaches, large groups of middlemen station themselves around the outlets of the most popular purveyors of mooncakes, the places people go to redeem their coupons. As market-makers, these middlemen offer to purchase your mooncake coupon at a discount or sell you a mooncake coupon should you wish to pick up one of the more prestigious brands at a great price.

The excess supply of mooncakes in the primary market has not been lost on the bakeries. They know that a significant portion of the public would accept a discount for their coupon rather than consume the mooncakes. So, they intentionally sell a volume of coupons that is in excess of their productive capacity and begin an incredible series of transactions in which everyone seems to come out better off:

When all the transactions are complete, the bakery earned CNY15, the distributer earned CNY15, the middleman earned CNY10, I impressed my mother-in-law with a fancy gift at only a fraction of the face value and she pocketed CNY40. We all enjoy a happy Mid-Autumn Festival, and no one had to go to the trouble of baking a mooncake!