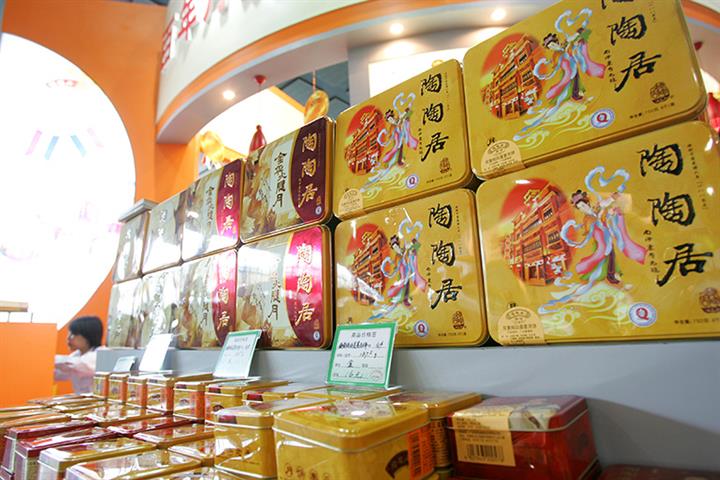 (Yicai Global) Sept. 16 -- The price of mooncakes, a traditional Chinese pastry eaten during the Mid-Autumn Festival which falls on Oct. 1 this year, is likely to rise by 10 percent due to increased production costs, leading to a drop in large volume orders, The Beijing News reported today.

Most Chinese companies put in big orders for mooncakes at this time of the year to gift to their employees. However, with the economic fallout from the Covid-19 pandemic, price is an important consideration and many firms are unable to afford the treat. This has led to a between 20 percent and 30 percent fall in the number of bulk buyers this year, the report said.

Companies have focused more on mooncakes’ packaging and exterior designs this year, which has also contributed to the rising cost, said Zhong Tao, general manager at a bread-making company in Cixi, eastern Zhejiang province.

Mooncakes traditionally come with a sweet bean paste filling and a golden egg yolk in the center. However, in recent years, newcomers such as US coffeehouse chain Starbucks, Chinese milk tea maker Heytea and even the US fastfood chain Kentucky Fried Chicken have developed their own flavors.

Older brands have also tried to jazz up their offerings. Daoxiangcun has teamed up with Tencent Holdings to offer gift boxes themed with the internet giant’s mobile battle arena game Honor of Kings, as well as with the Palace Museum in Beijing to provide a more classical design to its packaging.

The Mid-Autumn Festival falls during the full moon around the time of the autumn equinox and is a time of family reunion. Even if members of the family cannot gather together, they can know that wherever they are in the world, they are all looking at the same moon.