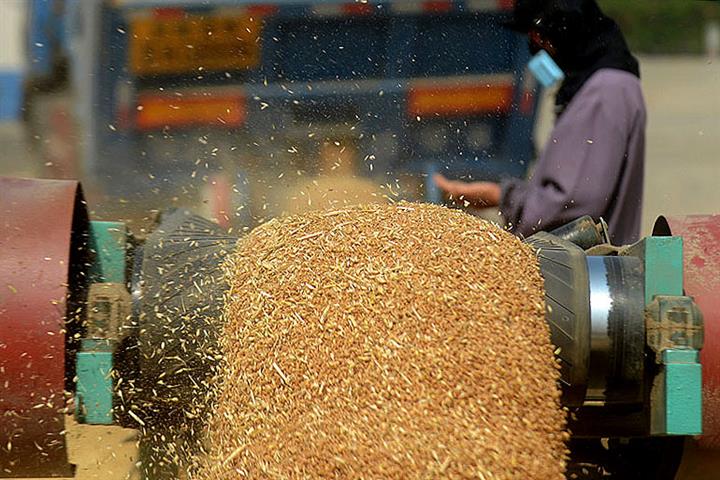 (Yicai Global) Aug. 26 -- Food security issues have recently become a concern in China under the double whammy of Covid-19 pandemic and historic floods. The conditions are, however, absent for further rises, and food hoarders should take heed and not panic to avoid losses from future falling food prices, China's agriculture ministry has urged.

China's grain production and supply is fully guaranteed. The international supply of bulk agricultural products, including corn and soybeans, is sufficient, and prices remain low, and thus domestic food prices lack the conditions for a sharp rise, said Tang Ke, director of Ministry of Agriculture and Rural Affairs' Department of Market and Information Technology, at a press conference today.

"Although some consumers and traders have brought about short-term consumption changes in the past by stockpiling food, this will have no sustained impact on food prices," Tang noted.

The State Administration of Grain and Reserves released a report on the progress of summer cereal procurement in main production areas on Aug. 12. SAGR had bought 42.9 million tons of wheat in these areas as of Aug. 5 in a nearly 9 million-ton drop from the same time last year. Some consumers afterwards raised their purchases over concerns food shortages will boost prices.

The amount of wheat purchased is basically the same as the average level in the past three years, though it has fallen from the same period last year. China has also had bumper harvests of the grain staple for many years and current stocks suffice, and equal the country's annual consumption, so consumers need not fret about the wheat supply.

Autumn grain generally grew well this year. Local droughts and floods were severe, but production resumed soon after these disasters. "This year will still be a bumper one if no catastrophes emerge in the later period," said Pan Wenbo, director of MARA's Planting Management Department.

Autumn is the main season for China's grain harvest, contributing about 75 percent of the annual output. About 40 days are still to go before this fall's reaping starts.