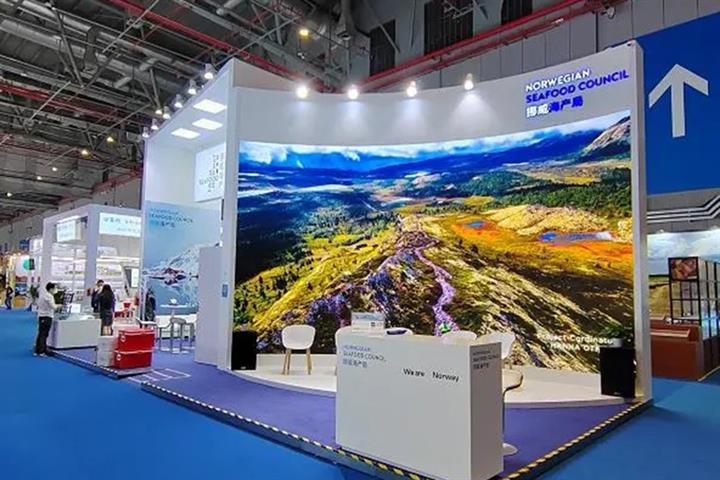 (Yicai Global) Nov. 8 -- Exports of Norwegian seafood to China jumped by nearly half in the first 10 months of this year as an increasing share of the market is made up by retail clients, according to the China director of the Norwegian Seafood Council.

From January to October, such shipments from Norway, the world’s second-largest seafood exporter, surged to 160,000 tons worth about NOK6.4 billion (USD624 million), a 46 percent uptick in value from a year ago, Andreas Thorud told Yicai Global.

There should still be room for growth as retail sales are accounting for a rising share of the total, according to the director. Some 54 percent of Chinese seafood consumers choose to purchase their products online whereas earlier seafood used to be mainly sold to restaurants. Salmon remains the most important product while sales of Arctic cod and mackerel have also jumped in recent years.

The NSC came to the ongoing China International Import Expo to express its desire to develop in the Chinese market in the long term, Thorud said. The council made its debut at the event this year and brought eight Norwegian seafood exporters with it to the expo in Shanghai.

Bjørnar Skjæran, Norway’s minister of fisheries and maritime affairs, said in a video on Nov. 6 that he hopes to connect Norwegian enterprises with Chinese partners while creating new opportunities for Chinese consumers to gain a better understanding of seafood from the northern European country.

The NSC has studied the behavior of Chinese seafood consumers this year. When selecting imported seafood, some 44 percent of surveyed Chinese consumers considered high nutrition as the main factor, in addition to flavor.

Chinese consumers pay more attention to health effects and attach importance to product origins when buying seafood and this makes the European country an ideal option, Thorud said, adding that Norway has gradually established an increasingly sustainable mariculture industry since the 1970s.