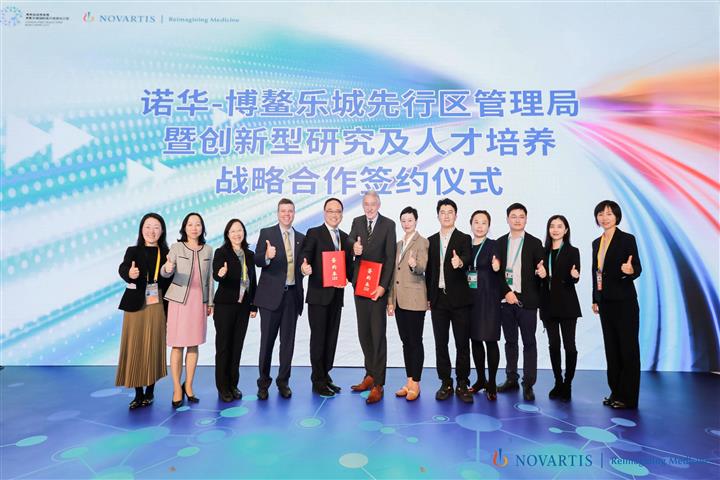 Novartis and Zhangjiang signed a memorandum of understanding during the CIIE to develop the Novartis China Life Sciences Open Innovation Platform to empower Shanghai's biopharma sector, Yicai Global learned from the Basel-headquartered company.

Setting up the platform is an important part of the firm's strategy in China, and it will become a new driving force for Novartis to promote research and development and innovation in the Asian country, said Dan Brindle, president of Novartis China.

Novartis is showcasing nearly 60 drugs that are already on the Chinese market, as well as close to 30 ongoing projects and transformative therapies, at the expo. The company is preparing to apply for 50 new drug registrations in the country in five years. Since 1987, Novartis has introduced nearly 90 drugs in China, involving fields such as oncology, orthopedics, and dermatology.

“This year will be our fourth CIIE," said Brindle, adding that Novartis was among the first multinational pharmaceutical companies to participate in the first CIIE in 2018.

"We have found it [CIIE] to be an important and unique platform to showcase our latest medicines and innovations, accelerate connections with the industry and explore partnerships within the industry and across industries," said the Novartis China president.

"I believe this will help further accelerate the introduction of innovative drugs to China, as well as help address healthcare challenges by working with partners in the healthcare ecosystem,” he added.

The expo has sparked new partnerships. On Nov. 6, the medical firm inked a cooperation agreement with the administration of Hainan Boao Lecheng International Medical Tourism Pilot Zone. The pair will use real-world evidence to improve drug safety and to accelerate Novartis medicine registration in China. Moreover, they will explore cooperation in translational research, talent development, and international exchanges.

Novartis and the southern Chinese medical tourism zone have worked together before this. Shortly after agreeing on collaboration in August 2018, Lecheng took the lead nationwide to introduce the pharma giant's Secukinumab in China to allow Chinese patients to have early access to the treatment for plaque psoriasis and certain types of arthritis.

Last year during the CIIE, Novartis and the pilot zone operator agreed to deepen their cooperation. Thus, Novartis has already had three medicines debuted at Boao Super Hospital. Among the 75 overseas medicines that the zone's latest insurance program covers, eight are made by Novartis, ranking No. 1 among peers.

The list of partnerships has expanded at the CIIE. Novartis inked a memorandum of cooperation with Philips China to explore a specialized disease diagnosis and treatment monitoring model, involving imaging diagnosis and standardized clinical management.

One of the tangible results is that UFH will purchase cholesterol-lowering medicine Inclisiran from Novartis. The drug has been registered at the United Family Medical Center in Hainan Boao Lecheng International Medical Tourism Pilot Zone.