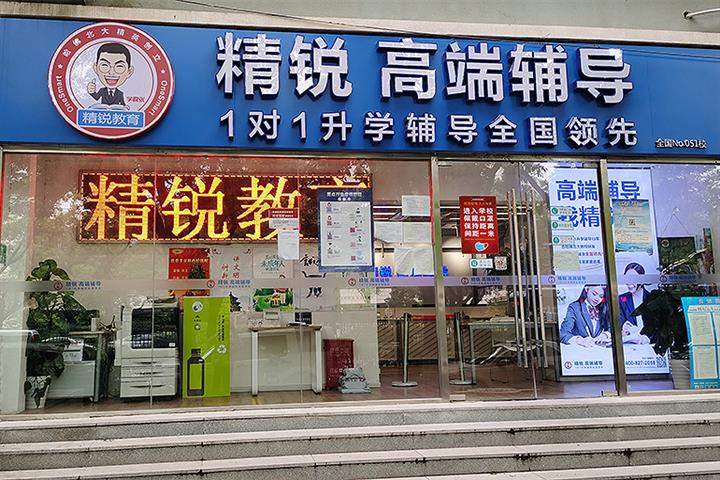 (Yicai Global) Oct. 13 -- Shares of OneSmart International Education Group plummeted after the Chinese education technology company said it is suspending all of its teaching programs and learning centers in China amid the country’s crackdown on for-profit tutoring.

In pre-market trading in New York today, OneSmart [NYSE:ONE] was down 40 percent at 24 US cents a share. As of yesterday’s closing price of 40 cents, the stock had fallen 90 percent so far this year amid the pandemic and China’s crackdown on online tutoring firms.

The move was “primarily due to challenges posed by recent changes in the relevant policy and regulatory landscape in China's private educational service industry and the resulting operational difficulties experienced by the company,” the Shanghai-based firm said in a press release yesterday.

China introduced a series of policies in July to ease the burden of excessive homework and off-campus tutoring on students in compulsory education. The measures included blocking e-educators from offering classes outside of school hours, on public holidays and at weekends, as well as banning such firms from listing and fund-raising activities. As a result, several well-known institutions, including Wall Street English, have gone bust.

OneSmart also said independent directors Liang Xu and Yan Gong have resigned from the company’s board.

Through its WeChat account today, OneSmart said it is facing huge operational difficulties and has tried everything it could but failed to figure out a way to continue its business. OneSmart has suspended its kindergarten-to-grade 12 educational business to switch focus to non-curricular subject activities, the firm said.

OneSmart’s more than 60 campuses in Shanghai have shut down, it said on Oct. 11. The firm is unable to refund offline students due to restrictions in its system and thus suspended the courses and refund process for the week. Parents can scan a QR code to register for a refund online.

Founded in 2007, OneSmart specializes in high-end one-to-one school subject tutoring, and charges fees higher than its rivals. The firm had CNY684 million (USD106 million) in operating revenue in the first quarter and CNY524 million in cash and cash equivalent, as well as CNY2.7 billion (USD418.4 million) in prepaid tuition fees as of Feb. 28.

OneSmart has invested in many educational training firms in K12, preschool and quality-oriented education, including Juren Education, significantly expanding its business.