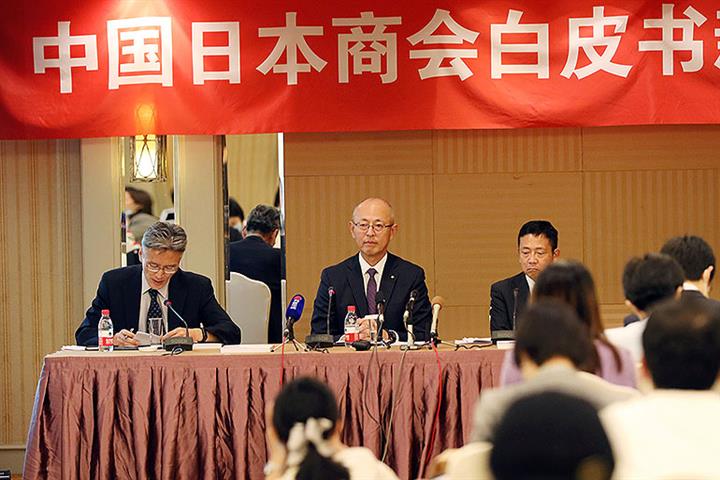 Over 92% of Japanese Firms in China Plan to Stay, Expand, Survey Shows

(Yicai Global) June 17 -- Japanese companies in China remain optimistic about the prospects of doing business in China, despite the impact of the Covid-19 pandemic and the continuing trade frictions between China and the US, according to a recent survey.

Over 92 percent of the companies surveyed said that they would maintain or expand their presence in China within the next one or two years, according to a white paper released by the Japanese Chamber of Commerce and Industry in China yesterday. There have been no large-scale transfer of assets or withdrawal of Japanese companies from China.

There are three reasons why Japanese businesses wish to remain in China, said CJCCI Chairman Mikogami Daisuke. For one, it is not easy to find new trading partners. Second, there are uncertainties in prospects after relocation. And third, they need to obtain customers’ consent if they want to replace raw material suppliers.

The proportion of localized procurement by Japanese factories in China was 67.6 percent last year, slightly down from 69.5 percent in 2019 due to the impact of the pandemic. Buying locally is an important way for Japanese firms to build up their supply chain in China, said the CJCCI, which has been conducting this survey since 2010.

The Regional Comprehensive Economic Partnership, the world’s largest free trade pact signed between countries in the Asia-Pacific region in November last year, not only means smoother trading, but also better market access regulations for trade and investment, said CJCCI Vice Chairman Takashima Ryusuke. “The RCEP has not yet come into effect. Japanese companies earnestly await the agreement coming into effect soon,” he added.

Some 90.4 percent of the 33,050 Japanese companies located in China responded that they have plans to expand the scale of localized procurement in the country where they are based over the next one to three years, according to a poll by the Japan External Trade Organization. This is much higher than the average 74 percent for Japanese firms in the Asia-Pacific region.

Japan was China’s third largest export destination in 2020, with exports amounting to USD142.7 billion, according to statistics from the General Administration of Customs. And China is the second largest importer of Japanese goods, worth USD176.1 billion.