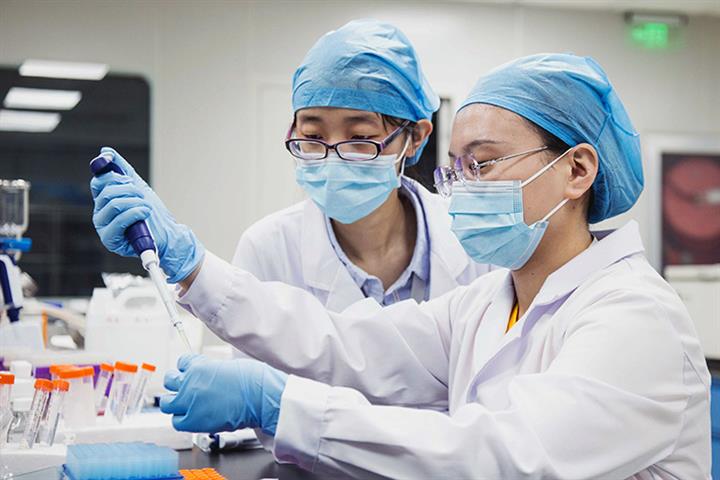 (Yicai Global) Nov. 12 -- Driven by the combined efforts of technology, talent, policies and capital, Shanghai has rapidly formed a complete biomedicine industry chain, and is constantly promoting the research and development of original innovative drugs.

Alain Mérieux, chairman of BioMérieux -- one of the world’s largest microbiological diagnostic companies -- decided to enter the Chinese market more than 40 years ago, making the French company the first foreign firm of its kind in the country.

BioMérieux officially settled its Asia-Pacific headquarters in Kangqiao, Pudong New Area in 2004. BioMérieux linked its teams in China and France to actively contribute to the development of diagnostic reagents for the Covid-19 pandemic.

“We must be open,” Mérieux told Yicai Global. “No matter how big the cultural and ideological differences among countries are, science knows no boundaries. Only when we cooperate can we have a future. It will stop if we are not open.”

In 2007, the company set up Roche Pharma Product Development China in Zhangjiang and became the first multinational to form a complete pharmaceutical industrial chain in the country. Last year, Roche invested CNY863 million (USD130.2 million) to build the Roche Innovation Center Shanghai, the third-largest strategic R&D center in the world after Roche's headquarters in Basel in Switzerland and San Francisco in the United States.

“Shanghai is an innovative, open and inclusive city, and the gateway to China for the world,” Roche CEO Severin Schwan told Yicai Global. “More and more drugs will be discovered and developed in China in the future.”

The German biopharmaceutical company Boehringer Ingelheim settled in Pudong New Area shortly after Roche in 2013. The company actively participated in the pilot reform of the Drug Marketing Authorization Holder system and introduced an innovative business model for biopharmaceutical contract production into China.

The presence of these big multinational has promoted the rapid development of China's biomedical field in the past 30 years. According to data for 2018, the total operating income of Zhangjiang's biopharma industry reached CNY72.1 billion (USD10.9 billion), and the industrial scale accounted for more than 30 percent of the total in Shanghai and nearly two-thirds of that in Pudong New Area. Biomedical companies in the core park of Zhangjiang Biomedical Base have received about USD1.7 billion of investment in total.

The scale of Shanghai's biomedical industry accounts for 7.4 percent of China’s total. The output value of Shanghai's biomedical industry was CNY383.3 billion last year, a year-on-year increase of 11.6 percent, and it reached CNY132 billion in the first half of this year, a year-on-year increase of 7.3 percent.

Shanghai is drafting a new three-year action plan for biomedicine as there are still bottlenecks facing its development. For example, the integration of capital with the biomedical industry remains incomplete, and the financing channels for early discovery of new drugs are not smooth. Also, compared with international biomedical centers such as Boston, the innovation ecology is still insufficient. Shanghai needs to strengthen its ability to transform scientific research into drug R&D.

"The current scale of China's pharmaceutical market is about CNY1.6 trillion (USD240 billion), of which drugs are the mainstay, and biomedicine accounts for only about 15 percent, so there is room for growth,” said Chen Shaoxiong, executive chairman of the Shanghai Biopharmaceutics Industry Association.

R&D strength and financing ability are two essential factors in the development of innovative drugs, and China's domestic industry has benefited in recent years from the reform of the drug approval system in 2018 and the launch last year of the Shanghai Stock Exchange’s Nasdaq-like Star Market.

TopAlliance, which settled in Zhangjiang in Decemer 2012, has become renowned due to its participation in the research and development of Covid-19 neutralizing antibody drugs. TopAlliance was listed on the Star Market in July, reaching a valuation close to CNY150 billion.

"Our development has benefited from the country's reform of the approval of new drugs,” CEO Li Ning said. A drug can now be approved for clinical research within three months through a special approval channel.

“In addition, the establishment of Zhangjiang Pharma Valley’s ecology is also an important foundation for the development of talent and R&D,” he said.

It took 10 years and USD1 billion to develop a medicine in the past, but now the time and investment have been reduced greatly, Li added.

TopAlliance's newly built Lingang plant meets the world's most advanced standards and is 10 times the size of its Suzhou facility, Li said, adding that it will supply antibody drugs for Covid-19 in the future.

“More than 95 percent of Hutchison China MediTech’s operations are in the Chinese mainland,” Hutchison China MediTech CEO Christian Hogg told Yicai Global. “The Zhangjiang government has given us support in terms of funding and policies since the beginning. The establishment of a free trade zone allows companies to expand their businesses at home and abroad.”