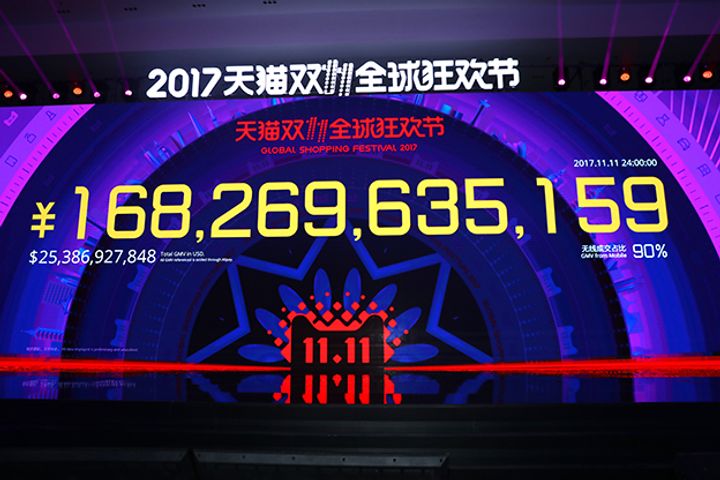 (Yicai Global) Nov. 13 -- Singles' Day, an annual Nov. 11 shopping event and online spending bonanza in China, has become an economic phenomenon in the country in recent years, attracting thousands of retail brands and hundreds of millions of consumers from around the world. Tmall, Alibaba Group Holding Ltd.'s [NYSE:BABA] online business-to-customer retail marketplace, raked in USD15.5 billion (CNY168.2 billion) on Nov. 11 this year, an annual increase of about 40 percent, setting a new record for the Chinese and global retail industries.

The success of the Singles' Day festival reflects the rapid development of the Chinese e-commerce market. Online retail revenues have grown by 40 percent on average over the past several years, and the contribution of online shopping to the growth in total consumer goods retail sales went up from 17 percent to 30 percent, the Ministry of Commerce said in a report. Consumption's contribution to economic growth has increased from 51.8 percent in 2012 to 64.6 percent last year, making consumer spending the number one economic growth driver for several years.

China's economy will be increasingly reliant on consumption going forward in line with the decline in economic reliance on investment and exports. Record-breaking Singles' Day sales are a manifestation of an unprecedented increase in domestic demand, an upgrade in consumption throughout the supplier-to-consumer chain propelled by people's growing demand for a better life.

The Singles' Day shopping frenzy attests to the fact that China has grown into a huge global consumer market, rather than an economy driven by low-cost exports. Tmall alone hosted sales for more than one million Chinese and international brands from 52 major global business centers on Nov. 11. Singles' Day has become a showcase of the Chinese economy and the Chinese consumer market for businesses across the globe. Instead of seeing China as a major exporter and a competitor in international trade, most countries are now convinced that they can benefit from the Chinese market.

Singles' Day also put the 'carrying capacity' of the Chinese economy to the test. A few years ago, Alibaba's servers and payment system almost collapsed with overwhelming numbers of orders rushing in at midnight Nov. 10, and the four major Chinese couriers had to spend several days to clear enormous backlogs of orders afterwards, resulting in incessant customer complaints. Today, however, after a series of system upgrades, a brand-new e-commerce retail infrastructure platform has been developed with significantly improved marketing and sales, automatic data analysis, payment and logistics systems.

The country's courier industry has been thoroughly tested during Singles' Day shopping seasons over the years, and it now probably offers the most efficient delivery services in the world. The State Post Bureau projected the volume of Singles' Day shipments this year to be over 1.5 billion, up more than 35 percent on the year. Instances of serious delivery delays have been on the decline despite the steep rise in order volume, thanks to new improved logistics systems.

On the other hand, the online shopping festival has also met some strident criticisms, and the skeptics questioned the relationship between e-commerce and the real economy, arguing that Singles' Day forces retailers to artificially create a peak in otherwise smooth sales curves, and that service has been seriously lagging behind. Some other people blamed e-commerce for the slowdown in real economic growth.

"The real economy must be prioritized in the establishment of a modernized economic system," and efforts should be made to "push forward in-depth integration of the internet, big data, artificial intelligence and the real economy," the 19th National Congress of the Communist Party of China said in a report. The relationship between e-commerce and the real economy should be a mutually beneficial one, and the two should fulfill separate but complementary roles, connecting products and consumers together via the internet by minimizing information asymmetry. Price wars and fake sales should be prohibited as they either cause disorder in the market or impose extra costs on consumers. By the same token, e-commerce should not be perceived simply as a threat to traditional retail businesses.

Chinese consumers' demand and spending power have increased dramatically as a result of continuous economic development and rises in Chinese people's disposable incomes. Singles' Day can also serve as an indicator of the healthiness of the national economy. What happened on Double-11 is a clear sign that the Chinese economy is very healthy, and that big data, mobile payment and logistics infrastructure systems are operating efficiently.