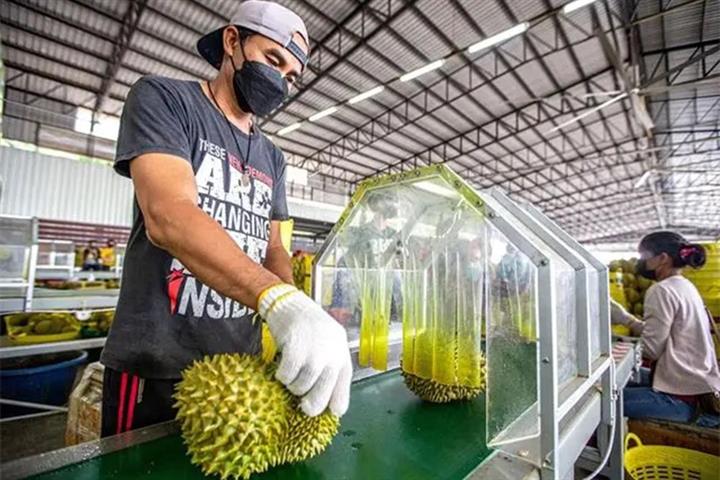 (Yicai Global) Jan. 20 -- Big volumes of Southeast Asian durians are flowing into the Chinese market ahead of the peak season of Chinese New Year, causing supply and pricing pressures to the main exporter Thailand as China eases its Covid-19 restrictions.

Large quantities of the tropical fruit, known for its distinctive scent, are entering China from Vietnam, the Philippines, Thailand, and Malaysia, prompting price reductions, an industry insider said to Yicai Global.

China imports fresh and frozen durians. In the past decade, most fresh durians in China used to come from Thailand. From 2021 to 2022, some 800,000 tons of fresh durians were shipped from the SE Asian country to China.

But Vietnam is challenging that dominant position as last July, China and Vietnam signed an agreement to allow Vietnam to export fresh durians to China. By November 2022, some 27,000 tons of durians had entered China through the Friendship Pass land border as transportation time and costs are lower than those of Thai fruit.

The competition is heating up as early this year, China and the Philippines signed a quarantine agreement to allow exports of fresh durian to China. The first batch of fruit is expected to arrive after the Spring Festival, an industry source told Yicai Global. Meanwhile, durians from Malaysia can only enter China frozen.

The quality of Vietnamese durians should be comparable with that of Thai fruit but Vietnam has quicker and more affordable transport options than Thailand. However, Thai growers should not worry too much as the seasons can complement each other. In Vietnam, durians are mainly mature from September to December, while in Thailand, the fruit is ready to be picked from April to July.

Mani, a Thai farmer with more than 30 years of experience in growing durian, said that in the past 10 years, the price of the fruit has increased by four to six times, reaching up to THB200 (USD6.10), resulting in income boosts for farmers.

Panusak Saipanich, president of the Thai Durian Association said that the durian demand exceeds the supply. "Nonetheless, we will supply the Chinese market with the best durians only."