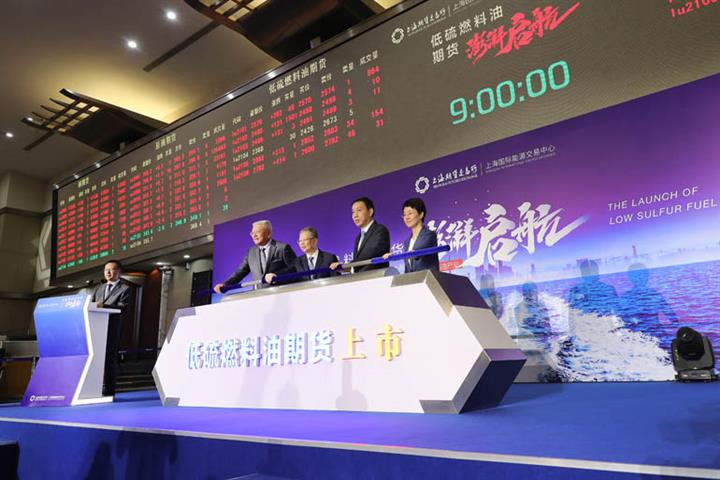 The new futures performed well on their first day. The main contract for delivery in January 2021 closed at CNY2,599 (USD367.40) a ton, a relatively low level throughout the day that was 9.76 percent higher than the benchmark listing price, after touching a high of CNY2,763 in early trade.

Bringing in overseas traders to participate in the new futures will help the formation of a reasonable pricing mechanism and provide open, continuous and transparent price signals and effective risk management tools for domestic and overseas businesses, SFE Chairman Jiang Yan said at the launch ceremony.

Crude oil and TSR 20 rubber are the only other two futures that foreigners are permitted to trade directly.

China is a major importer and consumer of fuel oil. Futures of common fuel oil with higher sulfur content were listed on the Shanghai Futures Exchange in 2004. But after global sulfur restrictions came into effect this January, low-sulfur fuel oil became the mainstream trade in the marine fuel oil market, leading to an urgent need to launch low-sulfur fuel oil futures.

“With the implementation of the export tax rebate policy, Chinese refineries are more willing to produce low-sulfur fuel oil,” Fu Xiangsheng, vice president of the China Petroleum and Chemical Industry Federation, said at the same ceremony.

The Marine Environment Protection Committee of the International Maritime Organization decided in October 2016 that from Jan. 1 this year, sulfur content in fuel oil worldwide would be cut to 0.5 percent from the original ceiling of 3.5 percent.