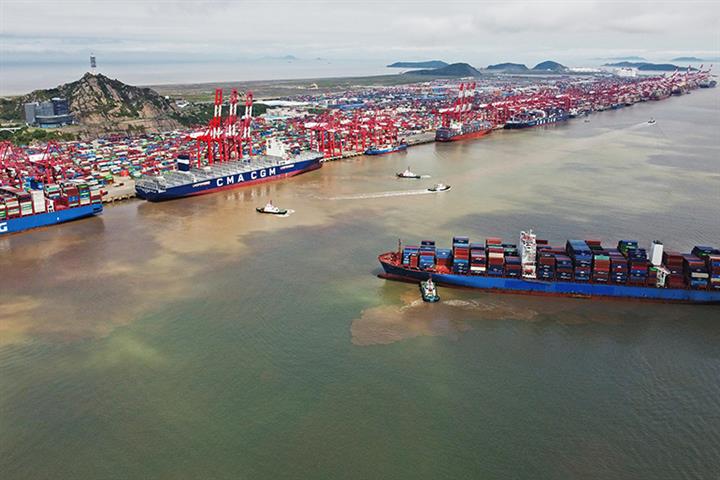 (Yicai Global) May 19 -- Shanghai’s port slashed the average time cargo ships took between arrival and departure last month, as the world’s largest port by container handling capacity has been operating normally in spite of the city’s Covid-19 outbreak.

The turnaround time dropped 34 percent to 2.12 days in April from a year earlier, lower than the 2.62 days of major international ports, according to data released by the Shanghai Shipping Exchange. A lower figure represents a higher operating efficiency.

In the first four months of this year, Shanghai’s container throughput rose 1.8 percent from a year ago to 15.3 million twenty-foot equivalent units, showed data shared by a unit of Shanghai International Port Group on May 9. The port handled about 12.3 million TEUs in the first quarter, up 8.1 percent.

Shipping companies acted to ensure logistics and transport during the city’s lockdown, which began about a month and a half ago. SIPG, the port operator, introduced Covid-19 traffic permits on March 29 to allow container transport vehicles to enter and exit. The permits were later expanded to cover the Yangtze River Delta region around the city.

Leading shippers such as China Cosco Shipping Group and Denmark’s Maersk have not suspended operations at Shanghai’s port, but have been offering discounts to clients on container detention charges as a result of the Covid outbreak, Yicai Global learned.

SIPG has been promoting integrated sea and rail transport to replace road shipments, which have been snarled since last month, Maersk told Yicai Global. Sea and rail’s share of the total has soared to 45 percent from 20 percent during the lockdown period, it added.