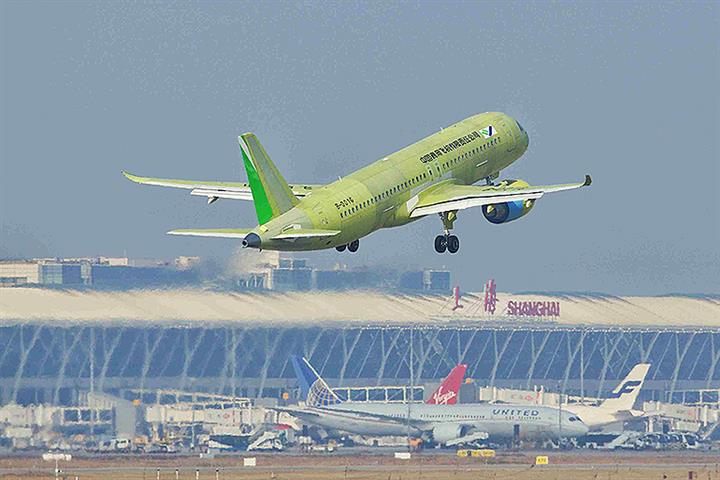 (Yicai Global) Nov. 13 -- Shanghai’s Pudong New Area, the cradle of the country’s aircraft ambitions, launched a jumbo jet industrial park last month, the first part of an aviation industrial cluster that is expected to be worth over CNY200 billion (USD30.2 billion) by 2035.

A Special Industrial Park for Aviation and Aerospace, covering 24.7 square kilometers, will be located in the Lingang New Area of the Shanghai Free Trade Zone, south of the Shanghai Pudong International Airport. Construction started on Oct. 23 and various sections will be available for use from 2022.

Twenty-two contracts worth CNY20 billion in the aviation development and manufacturing, aircraft tooling and interior decorations, aviation-related logistics and management services as well as related financial and creative industries have already been signed.

The new project will be building on a strong legacy.

Pudong is the home of the Commercial Aircraft Corporation of China, a state-owned aerospace manufacturer. Its main assembly plant is not far from the Shanghai Pudong International Airport. This is where it manufactures the COMAC C919, the country’s first self-developed large passenger plane. It is also the assembly base for the COMAC ARJ21, a home-built regional jet.

COMAC is the main vehicle for implementing large passenger aircraft programs in China, according to its website. It is also mandated with the development of trunk and local jet programs and realizing the industrialization of civil aircraft in the country.

There was some controversy when the aerospace giant decided to base itself in Shanghai 12 years ago. However, overall, the city has the best technological and manufacturing capabilities as well as the transportation services and financial environment needed for the development of large passenger aircraft.

COMAC’s Pudong plant broke ground in 2009 and in 2012 the firm moved its design and research and development center to the district’s Zhangjiang High-Tech Park. In 2018, it relocated its pilot flight center to the town of Zhuqiao in Pudong. Once a swampy piece of coastline, a 267-hectare plant for the final assembly of commercial aircraft has been built here.

The first COMAC C919 took its maiden flight from Pudong airport’s fourth runway in May 2017. It was the first jumbo jet that China developed according to international airworthiness standards.

The China-Russia Commercial Aircraft International Corporation, a joint venture between COMAC and Russian aerospace company United Aircraft Corporation, was also set up in Shanghai in 2017. CRAIC will be the main manufacturer of the COMAC C929, a long-range, wide-body, twinjet airliner developed by the two countries.

COMAC has attracted many other businesses in the upstream and downstream sectors of civil aviation to position themselves in Pudong. The area now has around 200 companies producing 150 jumbo jets a year with an output value of CNY100 billion (USD15.1 billion).

GE Aviation, an arm of US’ General Electric, supplies the engines for both the COMAC ARJ21 and C919. Its China headquarters are based in Pudong and it gives support for the test flights of home-built aircraft as well as maintenance and repair work.

Cincinnati-based GE Aviation has also set up a support hub in Pudong, the only global center outside the US. By working different shifts with the US, the two support hubs can provide year-round, 24-hour services for the nearly 40,000 engines produced by GE in use around the world. They also help to collect engine-related statistics as well as monitor and diagnose any faults.