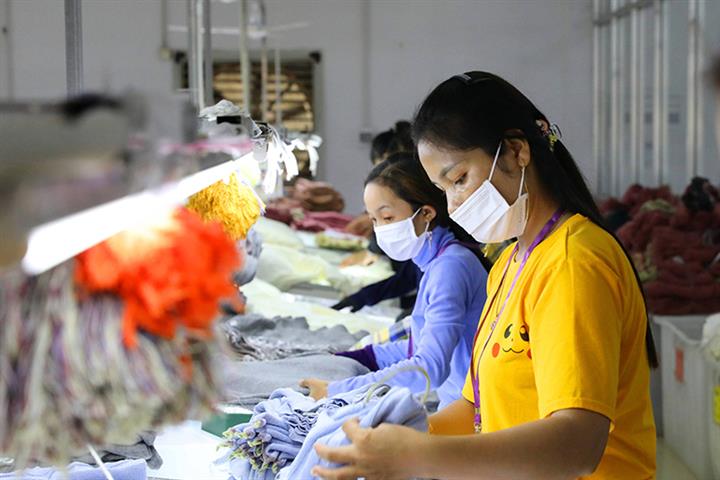 (Yicai Global) Sept. 21 -- Southeast Asian countries have experienced a significant drop in export orders in recent months as high inflation in European countries and the US affects consumer demand, and as clients who turned to them during outbreaks of Covid-19 in neighboring countries return to their old suppliers, Securities Times reported today.

“We’ve had very few orders this month, and the workforce has been furloughed in batches,” said a manager surnamed Zhang, who works at a small garment factory in Cambodia that provides original manufacturing services for European and American clothing companies.

Cambodia had benefited from a wave of order transfers last year due to nearby Covid-19 flare-ups, but many of these orders have been handed back. Since the second half, orders have decreased sharply, Zhang said.

“There have been fewer orders since March and most of them have shrunk,” said Annika, head of a garment factory in Myanmar, which mainly caters to the European market.

Vietnam’s electronics, textile, footwear and wood processing industries have been the hardest hit, according to the Ho Chi Minh Business Association. Usually, apparel companies would have orders piled up until the first quarter of the following year, but now many of them will have finished all their orders by November.

Vietnam’s woodworking businesses will be lucky to get 50 percent of the orders placed during peak season in March and April, said Zhao Qian, president of the China Business Association Ho Chi Minh Branch. Many companies only have 30 percent, and some small businesses might just get about 10 percent. It is the same in the footwear and clothing sectors, he added.

Whether the situation improves depends on if economies in Europe and the US bounce back, Zhao said. The situation is likely to remain the same until April next year at least.

Garment orders will almost certainly continue to shift to Southeast Asia from China, said a man surnamed Su who owns a textile firm near Shanghai. His company has been operating in Vietnam for more than ten years. Large customers in Europe and the US tend to concentrate on procurement, and good brands are starting to overlook small and medium-sized enterprises.

For instance, Vietnam imported USD5.1 billion worth of fabrics from China in the first half, amounting to 64 percent of the country’s total imported textiles. But once the Southeast Asian nation's export orders fall, this will also affect the export of Chinese fabrics to Vietnam.

There is also no sign of orders being transferred back to China, unlike the previous situation when export orders in China and Southeast Asian countries were in a dynamic balance.