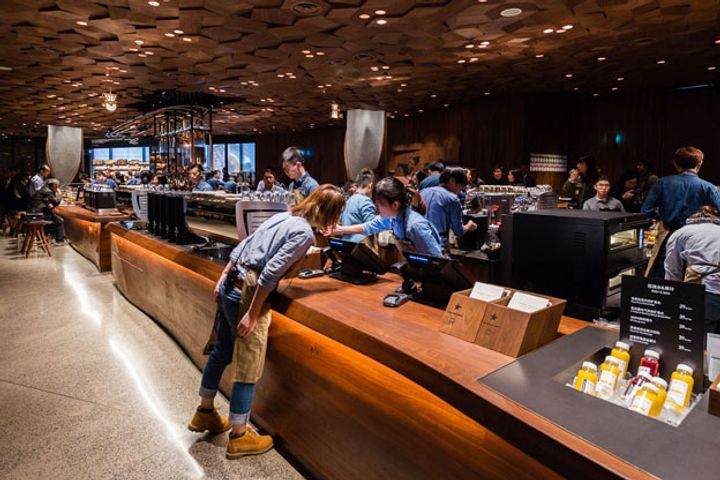 (Yicai Global) Dec. 5 -- Starbucks Corp. [NASDAQ:SBUX], the largest US coffee chain, has just opened its biggest store in the world in Shanghai.

This expansive venue, which spreads over 30,000 square feet (2,787 square meters), not only sells coffee, but also introduces every detail of Starbucks' production to customers via augmented reality (AR) technology.

This super coffee shop, located on toney West Nanjing Road, one of the globe's most bustling and prosperous business districts, is also only the second 'Reserve Roastery' Starbucks has ever debuted. The coffee giant introduced its first in December 2014 in its hometown of Seattle in the US state of Washington, and said it plans to open 20 to 30 such megastores worldwide.

Starbucks has also worked with Chinese Internet technology heavyweight Alibaba Group Holding Ltd. [NYSE:BABA] to introduce AR technology to the outlet.Aided by AR technology, consumers can watch the Starbucks' vignette of 'turning coffee beans into a premium cup of coffee.' They can also use the inquiry function on its online menu to learn details of the coffee bar and its production utensils visually via AR.

China is Starbuck's second-largest as well as its fastest-growing market worldwide. The country now has over 3,000 Starbucks cafes, with 600 in Shanghai alone.The company plans to increase the number of its Chinese stores to 5,000 by 2021, meaning it will open one new outlet there every 15 hours.