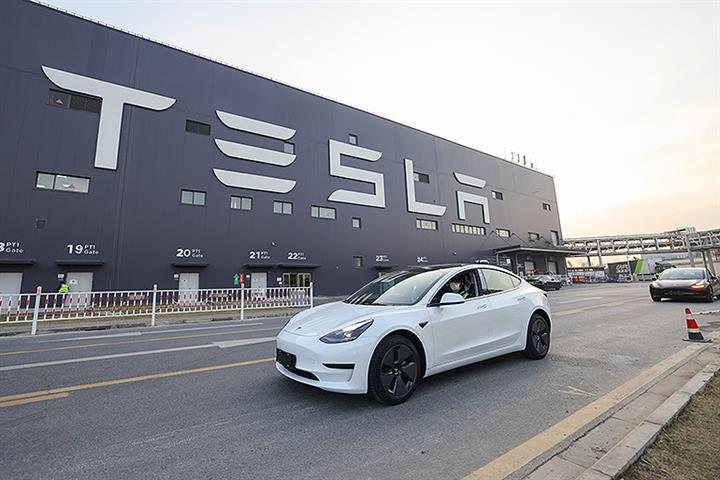 (Yicai Global) May 5 -- The stock prices of a number of Tesla’s suppliers in China surged after a report said the US electric vehicle maker plans to build another plant in Shanghai, near by its existing gigafactory.

Tesla plans to build a second factory about 200 meters from its existing plant in the Lingang Special Area of Shanghai’s free trade zone, China Securities Journal reported yesterday, citing sources at the automaker. The new plant will have an annual capacity of 450,000 vehicles, including the Model 3 and Model Y, it added.

“Whether the local supporting industry chains are complete or not is the primary consideration for Tesla’s plant location selection, because cutting down the costs and maximizing the profit is exactly what all companies are pursuing,” Cui Dongshu, secretary-general of the China Passenger Car Association, said last month, according to the report.

Tesla’s localization rate was 90 percent at the end of last year, Cui added.

With a new Tesla factory, Lingang would become “the world’s largest vehicle export hub,” Reuters reported yesterday, citing a letter the EV maker sent to local officials on May 1.

Before Shanghai, nine other cities, including Shenyang, in Liaoning province, Guangzhou, and Shenzhen, were rumored to be interested in attracting Tesla’s second plant, according to China Securities Journal.

California-based Tesla has not yet responded to the reports.

Its Shanghai plant, the company’s first outside of the United States, opened in 2018. In the first quarter of this year, it delivered 182,000 vehicles, equal to 58.8 percent of its global total, and revenue from China jumped 53 percent to USD4.7 billion, according to Tesla’s most recent earnings report. The plant delivered 484,100 cars in 2021, or 51.7 percent of the total.