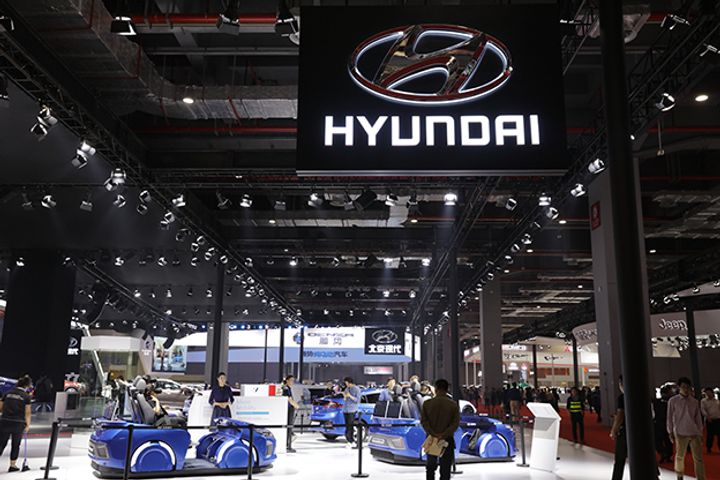 (Yicai Global) Sept. 14 -- South Korean auto brands have booked surging sales in an overall sluggish Chinese vehicle market. The views of industry insiders differ as to whether this sales spike will continue, however.

Hyundai, the largest South Korean carmaker, saw its sales burgeon in the second quarter. Beijing Hyundai, the company's joint venture in China, achieved a net profit of KRW33.2 billion (USD30 million) in the second quarter, significantly higher than its KRW21.3 billion in the first, per Hyundai's interim statement for this year. Beijing Hyundai also turned to profits from the losses of the same period last year.

Beijing Hyundai's sales in China also shot up. It shipped 389,800 vehicles in the first half, up by one-quarter over the same time last year, while its parent's global shipments only went up 4.5 percent.

Beijing Hyundai aims to sell 900,000 vehicles domestically this year, a goal it set at the start of this year, or nearly 40 percent of Hyundai's projected global sales.

"If I had only read last year's statement, I might've thought Hyundai was insane to make such a projection and that achieving this target would be impossible. After reading the latest statement by Beijing Hyundai, however, I suddenly see the growth potential of South Korean car brands in China, and whether it can achieve the sales target of 900,000 vehicles is unimportant," a professor with the School of Business & Management, Korea University, who has studied South Korean carmakers for several years, recently told Yicai Global.

A JV carmaker of Kia, Dongfeng Yueda Kia Motors had a more dramatic business performance in the first half.

It achieved a net profit of KRW3.2 billion in the second quarter, while it logged a net loss of KRW181.8 billion at the same time last year, its interim statement shows.

Dongfeng Yueda Kia Motors also greatly turned around its sales performance in China. In the first half, it shipped 172,300 vehicles in China, a one-third increase over the same period last year, while the growth rate of Kia's global shipment at the same time was less than 1 percent.

Industry insiders harbor differing opinions on the fundamental reasons for the soaring sales of South Korea's brands. The basic reason for the rising sales of Kia and Hyundai is the poor performance of their rivals and their strategy of sales promotion to seize market share, the professor noted.

"Beijing Hyundai slashed the price of some car models including the IX35, Elantra and Verna this summer, directly triggering the surging sales of South Korean car brands, especially Hyundai, in China," he said.

"We must acknowledge that the shipment of South Korean car brands has declined in September. It was hard to ensure smooth development in the second half of the year in an environment with uncertainties resulting from fierce market competition," he added.

However, a man surnamed Kim, an insider working in the strategic department of a Korean automaker, does not buy into the view of a 'short-term rebound.'

"Korean automakers' changed strategies have generated their anticipated effects, and have contributed to their gradual rebound in China's auto market. It can be said that the remedial measures taken by Korean enterprises after their loss of China's auto market share have begun to produce effects, and these measures will drive the continuous innovations of Korean automakers," he told Yicai Global.

These car manufacturers are adjusting their organizational structures and marketing strategies. They regard this as the way to halt their decline in China. "The usual practice is for cars made abroad to sell in the country of manufacture but considering that the company's vehicle capacity utilization rate in China is relatively low, we consider the possibility of exporting products made in Chinese factories to other countries," Kim said.

Korean automakers swallowed sluggish sales in China's automobile market before, which was mostly a result of their products and positioning. They could not achieve greater advantages than their rivals, whether in price, distribution or styles, another insider working for many years for Korean carmakers told Yicai Global.

The conservative atmosphere pervading these companies is the chief impediment to their innovation. The vehicle JVs they set up in China still like to cast around to find extraneous causes for setbacks, the insider added.

If Korean automakers are only satisfied with slight rises now, they will be buried later in China's car market, which changes with each passing day. They need to enhance exchanges with China's automobile market to truly understand its needs, and thus win amid its savage competition, the source advised.