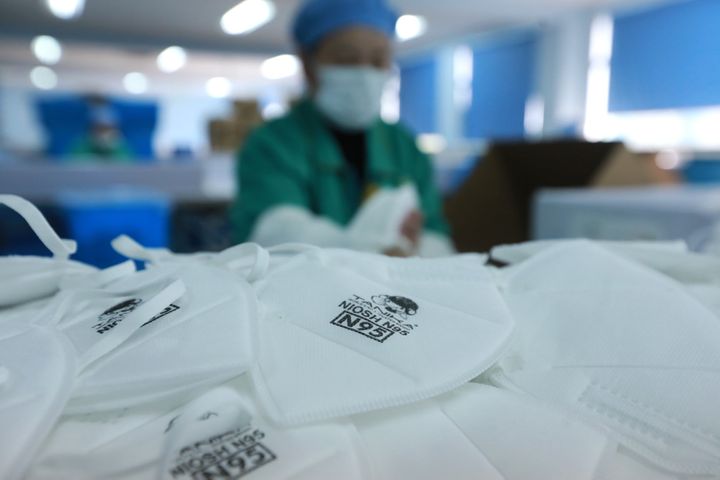 (Yicai Global) Feb. 10 -- Three Chinese carmakers have begun making face masks as the rapid spread of the novel coronavirus that originated in Wuhan drains supplies across the country.

Face masks and disinfectants have become a hot commodity in China due to the outbreak of the coronavirus, with most being shipped off to the disease's epicenter in Hubei province and supermarkets rapidly selling out when they re-stock shelves. Other non-industry firms, including Apple supplier Foxconn, have been turning their hand to maskmaking to cash in on the epidemic, which has killed more than 900 so far.

BYD plans to start designing and manufacturing masks and disinfectants to meet the urgent demand for these products, it said on Feb. 8. It plans to start shipping the goods on Feb. 17 and continue to do so until the epidemic has stopped, making around 5 million masks and 50,000 bottles of disinfectant a day from March.

GAC said the same day it was researching the construction of a mask production line and was striving to mobilize its resources to get one running as soon as possible. Its parts business will oversee the facility so there will be no impact on its main carmaking division.

SAIC-GM-Wuling announced on Feb. 6 that it would build a dust-free workshop with Guangxi Construction Engineering Group and put it to use this month. The plant would include 10 production lines for general medical masks and four for N95 masks, capable of producing a combined 1.7 million masks a month. N95 masks are certified as being able to block out at least 95 percent of particles below 0.3 microns in diameter.

China is the world's largest mask producer and has the ability to make more than 20 million a day, but production has only returned to about 70 percent since the end of the Chinese New Year, according to official data. Only about 600,000 of masks made each day carry and N95 or equivalent rating, so it would take more than six years to make just one N95 mask for each China's near 1.4 billion residents.

Technical barriers to mask production are not high, according to a research report from Huaxi Securities. The major issue is medical qualifications and a lack of raw materials, mainly polypropylene, which is also used in acoustic insulating cotton for cars, the report added.