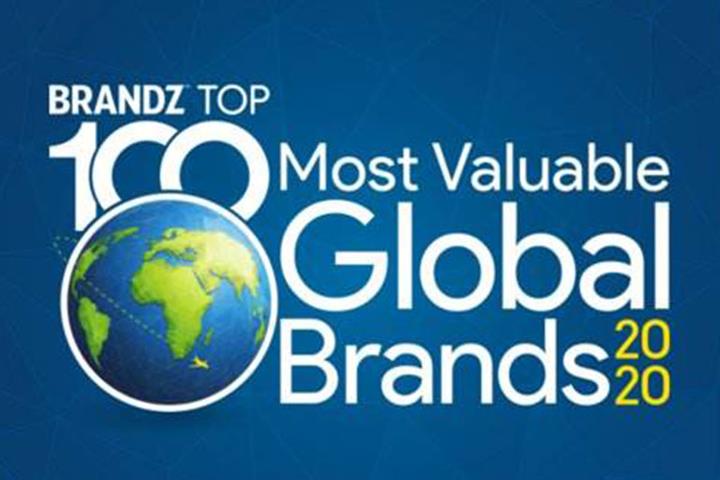 (Yicai Global) June 30 -- Video streaming app TikTok, known as Douyin in China, and Bank of China have appeared among BrandZ’s 100 most valuable global brands for the first time, joining 15 other Chinese companies.

China was the second-best represented country after the US which had 51 firms on the list, according to the 2020 BrandZ Top 100 Most Valuable Global Brands ranking released today by New York-based market research firm Kantar Millward Brown.

TikTok, run by Beijing-based ByteDance Technology, entered at No. 79 with a value of USD16.9 billion, while Bank of China came in 97th with at USD13.7 billion.

The overall value of the world’s top 100 brands grew by 5.9 percent this year to more than USD5 trillion, nearly equal to the annual gross domestic product of Japan, according to the brand equity database. The collective worth of the Chinese brands on the list rose by 16 percent.

“The continued growth in value of the BrandZ Top 100 shows that strong brands are in a much better place than they were in the global economic crisis of 2008-9,” said David Roth, chairman of BrandZ and chief executive officer of the European, Middle Eastern, African and Asian divisions of The Store WPP, the London-based group that owns Kantar.

“The ranking uses valuations data incorporating stock price performance from April 2020 to reflect the impact of Covid-19,” Kantar said, adding that those businesses that have regularly invested in long-term marketing and brand building have avoided the worst of the coronavirus crisis.

“While the impact of Covid-19 has impacted every business regardless of size or geography, consistent investment in marketing can and will help carry you through a crisis,” Roth said. “We see a significant improvement in brand equity now compared to 10 years ago because businesses understand the importance of investing in brand-building and are stronger and more resilient as a result.”

E-commerce giant Alibaba Group Holding, China’s most valuable brand, was in sixth place, up one slot from last year, with a 16 percent jump in value to USD152.5 billion. Internet titan Tencent Holdings was right behind at No. 7, also one notch higher than in 2019, surging by 15 percent to USD151 billion.

Chinese liquor maker Kweichow Moutai was the fastest growing brand in terms of value, with a 58 percent increase to USD53.8 billion, earning it 18th place.

Home appliance manufacturer Haier Group was the only Internet of Things ecosystem brand to make the list for two consecutive years. It reached 68th place with USD18.7 billion.

Electronics maker Huawei Technologies still managed a 9 percent gain in brand value to USD29.4 billion to reach 45th place from 43rd last year, despite significant challenges to its global operations due to a US trade ban imposed last year.