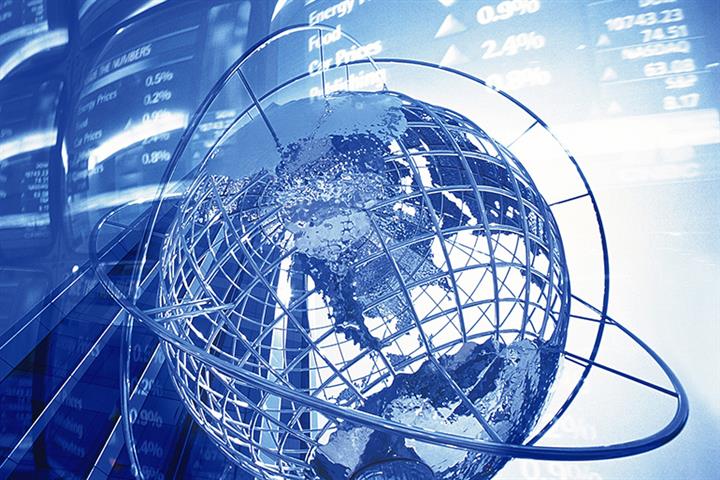 (Yicai Global) Sept. 2 -- In recent days, we have seen disturbing images from Kenosha, Wisconsin, where armed vigilantes have taken to the streets to protect themselves and their property from rioters. These vigilantes believe that the US government is no longer capable of protecting good people from bad and that they are justified in taking the law into their own hands.

Kenosha is the most acute example of a global loss of trust in governments. The OECD found that trust in public institutions had been eroding for many years, among its membership, and that the 2008 global financial crisis and ensuing recession heightened these tensions. It points to three factors that have caused the public to lose faith in their governments: low income growth and rising inequality, persistent corruption and ineffectiveness in managing global pressures, such as climate change.

Global surveys conducted by the Pew Research Center show just how broad and deep the loss of trust in governments has been. Since 2002, it has asked respondents to agree or disagree with the statement “Generally, the state is run for the benefit of all people”. In 2002, 60 percent of the respondents from 24 countries, on average, agreed with the question. By 2019, only 50 percent did, indicating increased frustration with leaders and political systems. 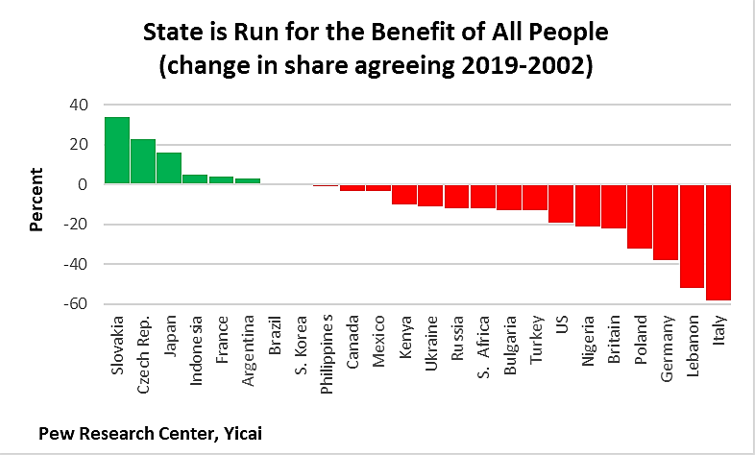 While China is not covered by the Pew survey data, there is evidence to suggest that it is among the minority of countries in which confidence in government is increasing. In July, researchers from the Ash Center for Democratic Governance and Innovation at Harvard’s Kennedy School of Government published their survey of Chinese citizen satisfaction with government performance. The Ash Center has tracked the attitudes of Chinese citizens toward their government in eight separate surveys between 2002 and 2016.  It designs the surveys, which are implemented by a domestic Chinese polling firm. The survey responses draw on more than 31,000 face-to-face interviews with individuals in both urban and rural settings.

Figure 2 shows the percentage of respondents that were satisfied with the performance of each of the four levels of their government over time. At any point in time, Chinese citizens’ satisfaction with government performance increases with distance: they are happiest with the officials in Beijing and least happy with those closest to home. Nevertheless, over the thirteen years covered, there is a broad increase in satisfaction with government at all levels, and the perceptions of local officials made the biggest gains. 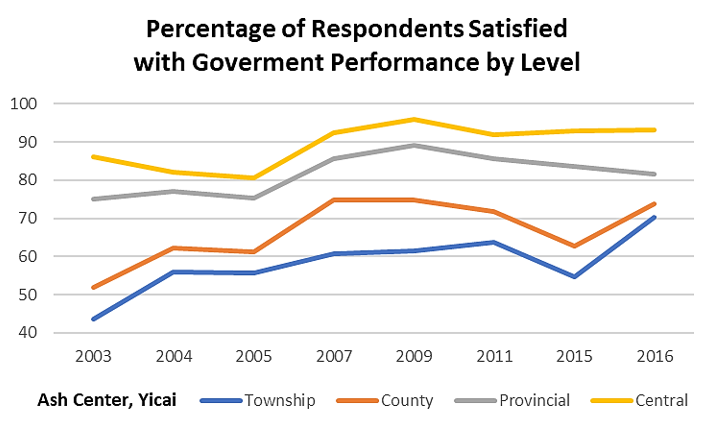 Given that the Ash Center’s surveys are conducted face-to-face, can we really believe their results?

The study’s authors note that the variation in the survey’s responses are meaningfully related to objective changes in the respondents’ well-being. This suggests that the responses are truthful. For example, low income respondents reported much greater increases in satisfaction, over time, than high-income respondents. The authors attribute this to increasing access to social welfare programs. Similarly, they find that much of the variation in satisfaction comes from measurable flows of government-provided goods and services. Larger increases in satisfaction are observed in areas where a higher fraction of local spending is on education, health and welfare. The same is true for improvements in road infrastructure.

As the OECD explains, citizens will lose faith in public officials, if they are perceived as being corrupt. The Ash Center notes that through 2011, little progress was made in addressing corruption, “there was a general sense that, despite spurring economic development and raising living standards, efforts to promote good governance had stalled, or even regressed.”

The anti-corruption campaign, which began in 2013, appears to have had a meaningful effect on the perception of local government officials’ integrity. Figure 3 shows that by 2016, the percentage of respondents that saw their local officials as “very clean” or “relatively clean” had risen to 65 percent from just 35 percent five years earlier. 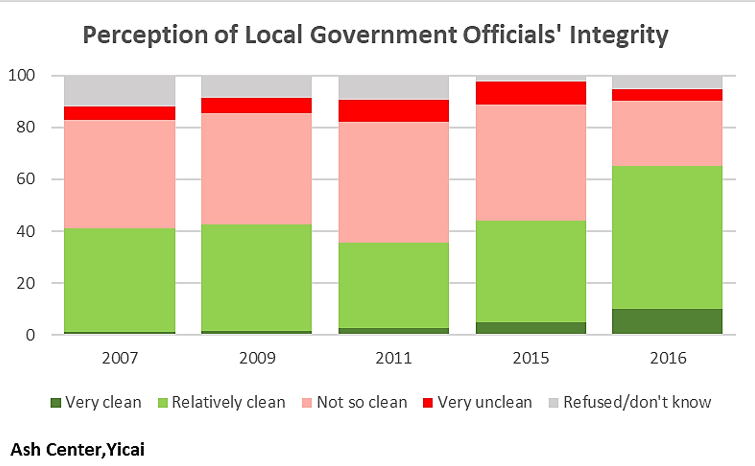 The Ash Center’s data end in 2016. To get a more recent picture of how Chinese citizens see their government, we turn to continuous sentiment data compiled by RIWI. RIWI is an innovative, Canadian trend-tracking and prediction firm. It captures the views of respondents representative of the global Web-using population. The company uses a technology that ensures that anyone online has an equal chance of random exposure to questions. The result of this approach is access to sentiment beyond typical survey respondents: more than 60 percent of RIWI China respondents report they have never answered a survey before. Respondents remain anonymous and RIWI does not collect, process, store or transfer personally identifiable data. This allows respondents to provide their views freely and securely. Respondents are not, in any way, incentivized to participate in RIWI’s surveys.

As the OECD explains, citizens’ trust depends, in part, on their government’s effectiveness in responding to global pressures. The outbreak of COVID-19 is one such pressure. RIWI has been tracking public opinion, in both China and the US, on a continuous 24/7 basis since early 2020 with respect to confidence in health officials’ ability to educate the public on treating or avoiding COVID-19.

Figure 4 presents public opinion in China and the US between June 1 and August 27. It shows that nearly three-quarters of the Chinese respondents have faith in their health officials’ ability to manage COVID-19, compared to only 46 percent in the US. 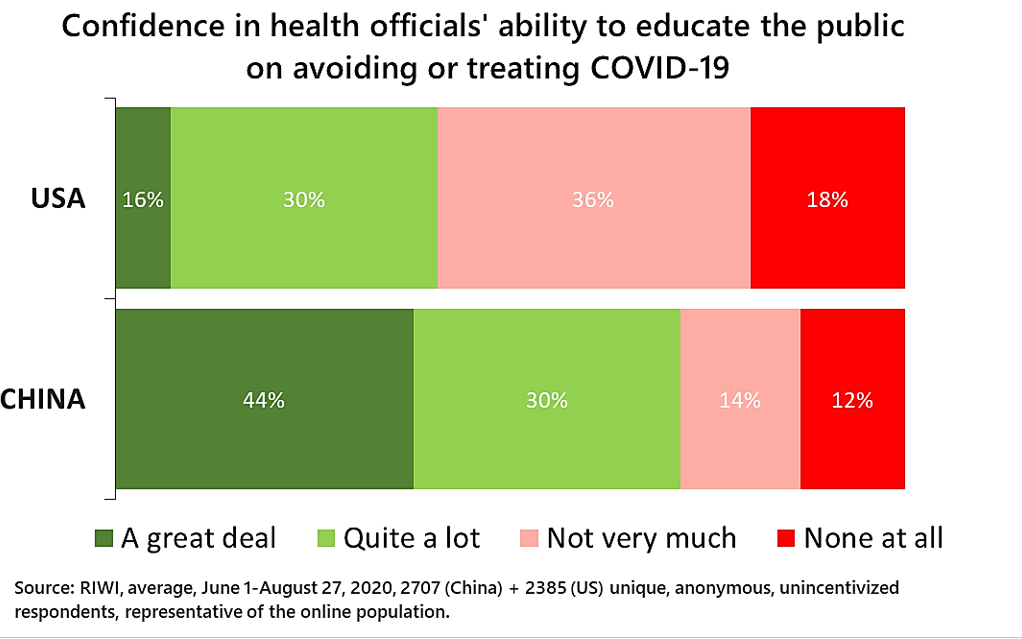 The OECD says that governments cannot function effectively without the trust of its citizens. Governments have a strong incentive to build trust, since a trusting public is more likely to be cooperative, while skeptical citizens may even resist policies that are in their own best interest. Indeed, the building of trust is not simply an indicator of successful policy, it is an ingredient that helps make success possible. China’s experience suggests that policies which increase citizens’ well-being are a good place to begin this virtuous circle.