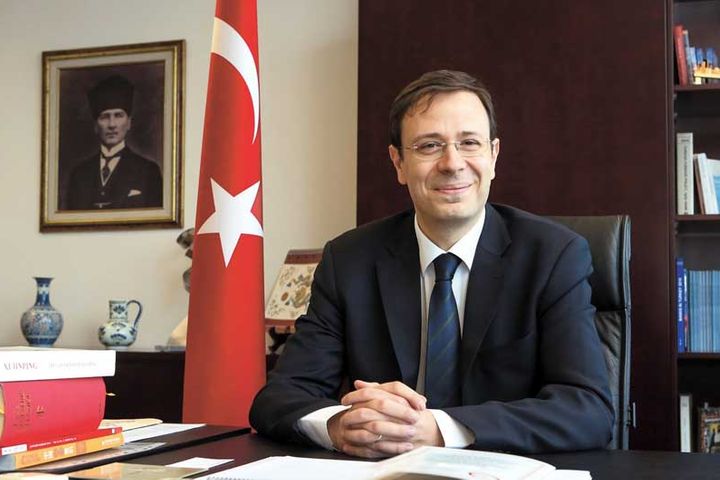 Turkish Firms Are Eager for CIIE

(Yicai Global) Oct. 31 -- Astride the crossroads of Europe and Asia, Turkey has been an important portal to the European continent for Chinese commerce and trade since ancient times. Turkey hopes to seize the opportunity the China International Import Expo offers to give the Chinese people a more complete view of the country.

Turkish companies are very interested in attending the first China International Import Expo, Sabri Tunc Angili, Turkey's consul general in Shanghai, said in an exclusive interview with Yicai Global, adding this is because the CIIE is not only the first national import expo, but also a positive signal of China's openness to the world.

Turkey's Ministry of Customs and Trade and the Commercial Counselor's Offices of Turkish embassies and consulates in China will be in charge of the products displayed in the national pavilion, Angili said.

Turkey's ministry of trade designated the country's industrial export associations for mining, metals and automobiles to arrange corresponding firms to participate in the expo, Angili also noted, adding that information about the CIIE was released by these associations early this year, and company registrations are very active.

The Turkish business community deemed the time opportune to enter the Chinese market when the roadshow for the CIIE was held in the country's economic hub of Istanbul on March 30, Angili told Yicai Global. Negotiations on the exhibition space and participating companies have been ongoing between Turkey's trade associations and the China International Import Expo Bureau since the former received registration materials, he said.

In addition to the exhibition organized by trade associations, there are also some independent participators. A total of 50 Turkish firms are expected to take part in the CIIE, 41 of which will display in the national pavilion. A delegation led by the trade minister will also attend the expo.

Of the Turkish companies participating in the expo, most are in agriculture, with 20 companies, followed by consumer goods ones with 12 and four in consumer electronics.

Turkish Airlines is among the large enterprises taking part. It will inaugurate new services targeting Chinese customers during the CIIE, Angili said. Istanbul-based power company AKSA Group will also join in. The company has set up three electric generator plants in China. Istanbul-based Turkish appliance brand BEKO, which is well known to Chinese consumers, will participate as an independent company.

Angili is more optimistic about the export prospects of Turkish food, auto parts and machinery manufacturing products among the various goods. Turkish dairy firms will also participate in the expo, while the approval process for Turkish dairy products exported to China is underway, he said, adding the country hopes to see cheap, high-quality Turkish dairy products in the Chinese market.

Turkey's exhibits for the CIIE have been steadily arriving in Shanghai lately.

Bilateral trade between China and Turkey dropped 5.1 percent per year last year to USD26.4 billion, per data from China's commerce ministry. Of these, Turkey's export to China rose 26 percent annually to USD2.94 billion, making up 1.9 percent of the total, a proportion 0.3 percentage points higher than last year. Turkey's imports from China fell 8.0 percent annually to USD23.4 billion, or 10 percent of the whole, a ratio 2.8 percentage points lower than the year before. Turkey ran a trade deficit of USD20.5 billion with China during the 12-month period.

While looking forward to the future of bilateral trade between China and Turkey, the consul also stressed the importance of addressing the trade imbalance. The soaring deficit does not contribute to sustainable trade cooperation between the two sides, but Turkey may act to counter it, and this is not an impossible task, he said.

Turkey would like to attract more Chinese tourists and more investments and wants to export more to China to solve this problem, he said. Currently, China exports 10 times more to Turkey than Turkey does to China, and Turkey hopes its exports to China will increase fivefold in the near future.

Not only large famous Chinese firms like Huawei, ICBC and COSCO are doing business in Turkey, but also many small-to-mid-sized firms. More recently, Chinese tech giant Alibaba Group Holding has been moving into Turkey's e-commerce market, he told Yicai Global.

The upcoming CIIE has publicized China's further opening to the world, Angili believes. For the Chinese government to hold the CIIE is a very sound move, he said.

The CIIE demonstrates the Chinese government's willingness to import high-quality products. Turkish companies understand the CIIE is completely different from traditional Chinese trade fairs such as the Canton Fair.

Foreign companies participating in the CIIE will gain in-depth understanding of China's demand and meet with buyers from all over China, Angili told Yicai Global, adding he believes more Turkish companies will participate in the second CIIE next year, with more advance planning.

Turkey's other advantage in deepening cooperation with China is the former's key location at the Belt and Road, Angili said. The Turkish government has supported the great Belt and Road project from the very beginning, he noted.

The lack of infrastructure is a vital problem confronting the Eurasian region, and One Belt, One Road countries have a high potential for economic development, said Angili, who believes these countries can seek opportunities for cooperation in the Belt and Road region through the CIIE.