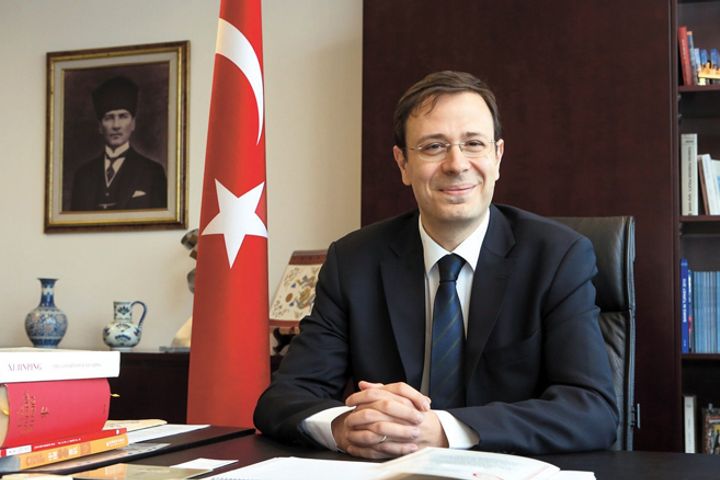 (Yicai Global) Aug. 16 -- The depreciation of the Turkish lira is a "political issue," mainly owing to the external pressure posed by US President Donald Trump's administration, the Turkish consul-general to China told Yicai Global, adding that new partners, such as China, will ease the economic pressures.

The fluctuation in the exchange rate will turn around based on two reasons, said Sabri Tunç Angili, adding that the first of them is that the root causes are political.

The immoderate sanction of the US government worldwide has caused objections of many countries, such as Germany, Italy and the UK, said Sabri Tunç Angili. Trump threatened to double tariffs on Turkish steel and aluminum imports in a tweet on Aug. 10, despite the fact that the Eurasian country's currency has dropped over 40 percent of its value this year, partly caused by the strong US dollar.

Secondly, Turkey has established close economic ties with global markets during the past six years, upholding a significant interdependency with Europe, Angili said, giving examples of Spanish bank Banco Bilbao Vizcaya Argentaria, Italian financial firm UniCredit and French Banque Nationale de Paris that run considerably large overseas branches that they will not easily give up on.

The lira shed 18 percent of its value on Aug. 10. By that day, the exchange rate of the currency against the US dollar had plunged 40 percent this year. Today the currency traded at USD0.17, which was 6.3 percent more than six days ago.

Turkey's central bank is able to offer banks the necessary liquidity, and the banking industry itself sees no bad debts, said Sabri Tunç Angili, adding that the lira will be stabilized in the short term thanks to the government's measures, the inter-dependency between Turkey and global markets, as well as the activeness of private sectors.

The unexpected crisis will force Turkey to find more diversified economic partners, and accelerate its cooperation with China, Angili said. The Turkish government has commenced reforms in the economy, like increasing exports, and paying more attention to research and development. This, however, cannot be finished overnight, Angili added.

The consul-general comforted Chinese investors by saying that the investment advantages of Turkey remain unchanged. The Customs Union agreement with the EU, the vitality of the large population of youth, and the favorable geographic position linking up Europe and Asia will remain solid. Chinese firms surely had already considered the long-term development before they invested in Turkey.